Kamal Haasan & Rajinikanth redefine rivalry & the fan-base is beyond amazed! 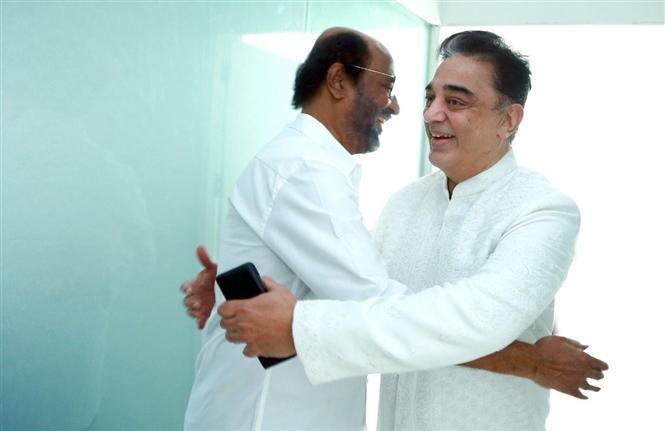 It is a known fact that both Kamal Haasan and Rajinikanth share a mutual respect and friendship, that has never seen the shadow of their work or political rivalry cast upon. The civility of their relationship is one for the books and today when the two stars came together for the bust unveiling of their mentor K. Balachander, they have amazed their audience yet again.

Kamal is celebrating 60 years in the movies and the actor who recently turned 65 called Rajini to be there at his production office for the bust unveiling. Speaking at the event, Rajini who shared his memories from their earlier days and of Raaj Kamal Films International (RKFI) said,

“Aboorva Sagodharagal is my favourite film produced by Raj Kamal Films International. I woke him up in the middle of the night to congratulate him. Similarly, Thevar Magan is such a classic. The message of that film is superb..Godfather, Thiruvilaiyadal and Hey Ram are my three go to movies when I don’t have anything else to watch. I have seen Hey Ram almost 30 times [Hey Ram was written, acted in and directed by Kamal.”

Kamal Haasan who recently did Rajini the favour of unveiling a motion poster from his movie added, "Both of us (Rajinikanth and Haasan), at a point in time, decided that our paths are different, we'll respect each other as we believed that the future was going to be good for both of us. Today, we continue to respect, criticize and endorse each other..We were fans of each others during the time when we didn't have fans,we appreciate each other always."

The star duo's statements are winning hearts on the internet, as they have proved yet again that civility can very well be maintained in rivalry.