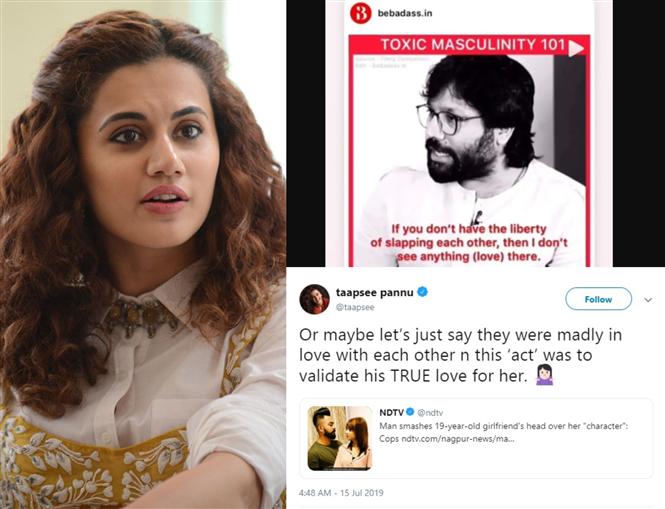 It is no news that Sandeep Reddy Vanga, director of films like Arjun Reddy and Kabir Singh stirred up a controversy recently when he stated that when two people in a relationship hit each other, it is "not assault" but "liberty of the expression between a couple who is deeply connected". He even went as far as claiming that  those who haven't experienced this have "never experienced true love".

His statements when surfaced left a lot of people disappointed and many outraged and just when it was dying down, actress Taapsee Pannu brought it to the lime-light again with her not-so-subtle dig at Sandeep's statements. Quoting the news of the brutal murder of a 19 year old girl by her physically violent boy-friend, Taapsee wrote, "Or maybe let’s just say they were madly in love with each other n this ‘act’ was to validate his TRUE love for her."

However, a real-life murder being used for digs between film celebs did not go too well with the twitterati with one user @KarunaGopal1 commented at Taapsee, "You must be deranged to take a dig at Kabir Singh while reacting to a real murder." Another user @kesar_akanksha called it, "CHEAP SARCASM ON DEATH OF A 19 YEAR OLD GIRL. BOLLYWOOD KEEPS SETTING NEW LOWS EVERYDAY.".

@nishad_raza gave three thumbs down stating, "Not in a good taste Tapsee..." while @madhuriketa pointed out that Taapsee's sarcasm was ill-timed. She wrote, "Well looks like she chose the wrong topic to be sarcastic about. It’s a young girl’s death we are talking about. And sarcasm! Like duh!"

While @sridhar__TN reminded that sarcasm over the killing of a child needed refinement, another user @gv9195 summed up the collective emotions towards this tweet of Taapsee's by noting, "It's in very bad taste, have mercy on us and her parents. Their daughter's brutal murder should not be a tool of justifying your argument. Wish sanity returns sooner to bollywood."