Suriya lashes out at the National Education Policy, 2019! Fears it will turn into another NEET! 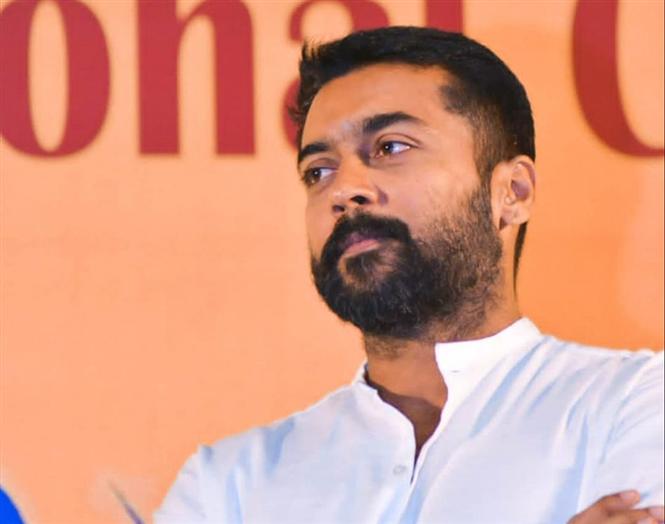 Actor Suriya in a scathing speech has lashed out at the policy changes put forth in the draft of National Education Policy, 2019 and how people of our state should collectively ensure that the system doesn't go completely under the control of the center. The star who has been supporting education of under-privileged children for over 10 years through his Agaram Foundation pointed out the defects in the current suggestions made by the government (can be viewed at https://innovate.mygov.in/new-education-policy-2019/).
Reiterating that people have upto July 30, 2019 to register their complaints and doubts about the same, Suriya insisted that the future of the upcoming generation should be kept in mind before these changes get implemented. The actor's speech was also published in a press release from Agaram Foundation, the combined excerpts of which follow.
Pointing to e. & f. clauses of 'Strengthening Early Childhood Care and Education', Suriya said many primary schools were started in the all villages of Tamil Nadu with the sole intent of promoting education for maximum number of students in villages. But the plan to integrate mid-day meal scheme, pre-school education and primary school education would result in shutting down of these infrastructure which defeats the purpose of promoting education, feels the actor.

e. All aspects of early childhood education will come under the purview of the Ministry of Education (as the current Ministry of Human Resource Development will be renamed), effectively linking early childhood education with the rest of school education - a transition plan will be finalized jointly by 2019 by the Ministries of Education, Women and Child Development, and Health and Family Welfare.

f. An effective quality regulation or accreditation system will be instituted to cover all preschool education (private, public and philanthropic) to ensure compliance.

While Suriya said that clause f. under 'New curricular and pedagogical structure for school education' needs more clarification, clause h. is difficult even for kids and parents who grow up in the cities, let alone students in the rural areas. Suriya cites his own family which is tri-lingual, as an example for this scenario and states that it is difficult even for them to teach a third language to his children.

f. Education will be in the local language/mother tongue at least till Grade 5 but preferably till Grade 8, with a flexible (bilingual) language approach where necessary.

h. The three-language formula will be implemented in spirit throughout the country; special measures will be taken to develop and recruit language teachers.

With respect to point k under New curricular and pedagogical structure for school education, Suriya pointed out that the gross enrollment ratio of Indian students is currently only at 25% and the new assessment suggestions of computerized testing and semester examinations will contribute to a decrease rather than an increase in the same.
The actor also sees this as a means of encouraging the deplorable 'coaching center culture', an industry which already sees a revenue of upto Rs. 5000 Cr. in yearly turnover in our country.

k.  Assessment will be transformed to support student development...By 2025, assessment at middle school level and above will be through adaptive computerized testing. From 2020/2021 onwards, the autonomous National Testing Agency will administer aptitude tests and tests in various subjects, which can be taken on multiple occasions during the year.

Also with respect to clause a. & b. under the same subject, Suriya says that it is not rational to expect a 13 year old to make a decision about his future profession.

b. The Secondary Stage will comprise four years of multidisciplinary study and will build subject depth, critical thinking, attention to life aspirations with flexibility for student choice.

Suriya concludes by giving an example of Tamil Nadu's results at the NEET exams stating, "About 60% of students who passed NEET from Tamil Nadu are students who either passed grade 12 the previous year or the year before. They get their medical seat only after getting coached by private coaching centers. If such a situation prevails in other areas (of education) too, then it along with non-regulatory entrance exams would cause an imbalance in the social justice of the Indian education system."
Related Link: https://www.moviecrow.com/News/23281/is-arrahmans-autonomous-tweet-aimed-at-centers-revised-nep--hindi-imposition