Sasikumar has always backed himself as an actor and chosen the scripts wisely. In all his previous movies, the scripts had elevated his screen presence. However, in ‘Kutti Puli’, it looks as if debutante director Muthaiah has solely depended on Sasikumar’s popularity to make a film out of a wafer-thin screenplay. The end result leaves the audience in exasperation.

Kutti Puli (Sasikumar) is a rugged guy who will even risk his life for the welfare of people around him. He shies away from marriage, while his mother (Saranya Ponvannan) strives hard to get him married to a suitable girl. A rival gang wants Kutti Puli dead as revenge. Bharathi (Lakshmi Menon) falls for Kutti Puli, seeing his righteousness. Will Kutti Puli marry Bharathi or will he be killed?

The script seems to match Sasikumar’s wavelength. A rural set up revolving around family and friends looks like a home ground to him, but he suffers big time in the second half. He fails miserably in romantic sequences. He needs to choose a different genre next time if he continues to act.

Lakshmi Menon has not managed to impress the way she had been doing in her previous movies. The script has not given her enough scope to perform. Saranya cannot make a mistake in the role of a doting mother. Murugadoss as Sasikumar’s friend has done a fair job.

Ghibran has produced a good melody in the form of ‘Aruvaakaaran’, while other songs are not catchy enough to linger on your mind. But, what is wrong with his background score? Why has he mashed up all the old songs and stringed them together as background score in the second half? It might be the director’s idea, but the music director should have stood up for himself.

Mahesh Muthusami’s camera work is just functional and does not bring in any advantage to the movie. Editor Gopi Krishna should have trimmed the second half at least by 15 minutes.

Debutante director Muthaiah has not given importance to make an engaging screenplay. The story never takes off and suffers a lot without interesting sequences. Sasikumar’s acting ventures always had good comic quotient and revolves around friendship predominantly. But, the comedy sequences irk the audience in this film. Also, the son and mother sentiment scenes do not create a big impact.

The second half scenes involving a bunch of people from ‘Kana Kanum Kaalangal’ and Sasikumar’s urbane makeover act are examples of the director’s insipid vision. The movie ends with a very gory and disturbing climax, which adds salt to the injury. The only positive aspect from the film is that there are few powerful dialogues, but that alone cannot save a movie.

The movie suffers due to amateurish screenplay and pointless drama. ‘Kutti Puli’ is not a perfect Sasikumar outing, as one would expect it to be. Will Sasikumar get back to his roots, which is direction? If Sasikumar continues to act, will he take up a different genre? 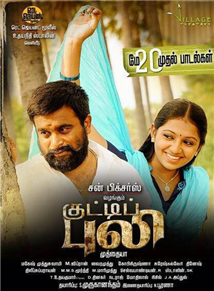