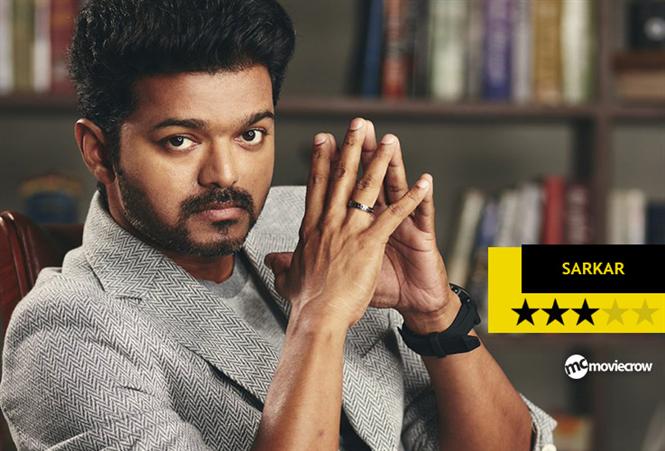 The coming together of Vijay and AR Murugadoss for the third time had already sky-rocketed the expectations for Sarkar. With Vijay hinting at his political entry recently, Sarkar is now the talk of the town as Vijay openly takes on corrupt politicians in the movie. Has Sarkar managed to replicate the magic of Thuppakki and Kaththi? Read on to know the answer.

It is clear at the onset that Sarkar is a strong anti-establishment movie. The creators make no bones about it. The movie has numerous references to the current state of affairs in Tamil Nadu. The dialogues and visuals are so direct that it would have made no difference if they had even mentioned real names, with or without muting. Nobody is spared. So, how did Sun Pictures decide to even produce the movie as it takes a dig at the entire political system in Tamil Nadu and all the elements associated with it over generations?

Despite all the controversies, AR Murugadoss should be applauded for infusing intelligence in scenes of beaten-to-death storylines. The story arc of Sarkar is familiar and has strong similarities to at least a dozen movies, including a number of Shankar movies and AR Murugadoss' very own creations. Many of the scenes look predictable and manipulative to evoke certain emotions from the viewers. Yet when the scene ends, the viewers get the necessary high despite all the logical deficiencies. The director should be unreservedly applauded for making it all come together and work spectacularly with his scene construction, dialogues and some twists that keep it highly engaging from start to finish.

Sarkar is Vijay’s style riot. Without any doubt, this story with any other star would have fallen flat. The dialogue delivery, stunts, dance exude boundless charisma. His mannerism albeit being indulgent works big on the screen. Vijay’s presence and ability to carry a movie with his histrionics continue to get better with every movie. Vijay shows no insecurities as he sports a few grey hairs in his beard and still looks as young and fit as ever been.

Keerthy Suresh shows up for a couple of songs and acts cute in a few scenes in the first half. That's it. Varalakshmi emerges as a strong protagonist with an author-backed role. Varalakshmi makes the best use of the limited screen time and provides a formidable challenge to Vijay in the second half. Radha Ravi does well as a second fiddle and in instigating the hero.

Sarkar is arguably AR Rahman’s weakest soundtrack in recent times. He has made up for it in the background score as he delivers exactly what is required for a commercial movie. Girish’s camerawork and Sreekar Prasad’s editing work very hard to elevate Vijay. The crew has experimented with high-speed shots and ramp cuts in fight scenes which makes fans go out of control. The choreography is tailor-made for Vijay’s signature style. The stunt sequences are intense and sometimes violent.

Despite lack of fresh material, Sarkar has a number of rousing elements necessary to make it a sure-shot. AR Murugadoss has a strong social message wrapped in multiple layers of commercial elements. The movie will be a super hit. If the current establishment tries to ban the movie, it will become a blockbuster hit. Go watch before all the political drama begins about cutting the scenes and muting the dialogues.