Devarattam starring Gautham Karthik and Manjima Mohan in the lead roles is directed by M. Muthiah of Komban, Marudu and Kodi Veeran fame. The teaser of the film has been released by the makers. The film deals with caste related violence.

Devarattam is Studio Green's 15th production venture. The technical team of this film includes Nivas K Prasanna for music, Sakthi Saravanan for cinematography and Praveen KL for the edits. 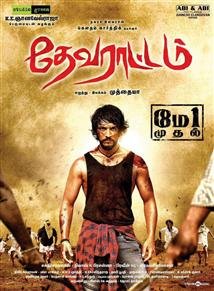