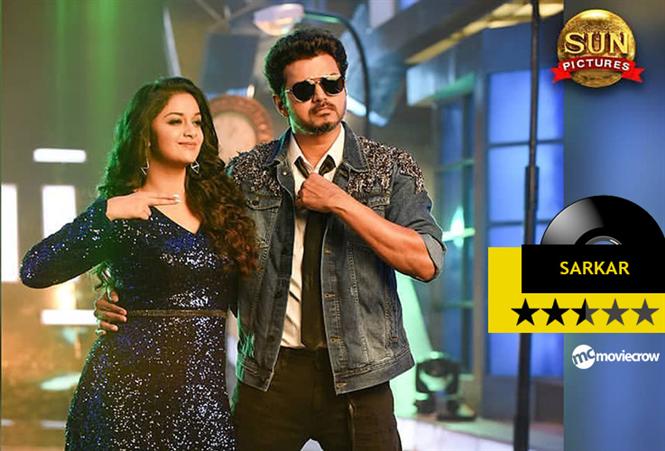 It is bit difficult to keep the expectations aside for an album like 'Sarkar' for many reasons. One, it has a SuperStar actor like Vijay (who has political ambitions as well) in a film titled 'Sarkar'. Two, it is his third colloboration with A.R.Murugadoss after blockbusters that set the BoxOffice on fire, Thuppaaki and Kaththi. Third, it is the second consecutive album from A.R.Rahman - Vijay Combo. Though they have earlier worked together in 'Udhaya' and 'Azhagiya Tamil Magan' (which I believe, is their most exciting work so far).. it is tough to leave behind the sensation that 'Aalaporaan Tamizhan' became in their last venture together, 'Mersal'!

Oru Viral Puratchi (✓) is probably what I would call as the face of this album. The song that's strong by every means.. in its lyrics.. vocals.. orchestrations.. rendition.. emotion.. It is the kind of song that you can't wait to catch up in the film. Lyricist Vivek has done a great job with his lyrics that list out some of the recent democratical tragedies happening to people of TamilNadu, ranging from having a CM who is a no man.. whom none of us voted for! Or a shoot out during Sterlite issue! The song has all the traits to become the anthem of hundred societal flaws we face or will be facing everyday.

Simtaangaran (✓) The number that received a great share of criticism is actually a pretty good foot tapping track. I would blame the team for bringing it up as the first single when they could have stunned one and all with a number like 'Oru Viral Puratchi'. The lyrics are kiddish.. yet the melody underneath has the charm of 'screen,a Kokkarakko' from 'Ghilli'. The vocals grooves over you as you repeat listening to them!

Top Tucker.. Sung by Mohit Chauhan, the number has a cool swag in praising the hero. For the genre this song belongs to.. it is a very unusual track! The 'Yendae' part is such a hook!

CEO in the House.. The theme like track is probably the most underwhelming number of the album! It lacks the high and low that a song needs for you to remember. The song is so weak that it sounds pretty much the same all throughout!

OMG Ponnu.. The sister number of 'Macho' from 'Mersal' and 'Style' from 'Sivaji', again fails to hold the listener's interest. You can already imagine a bunch chunk of people leaving the theater to have a smoke or get a popcorn the moment it comes on screen. May be, to remind there is a heroine in the film!

Listening to the album as a whole.. one might feel that except for all the mastery and strength that has gone into 'Oru Viral Puratchi', ARR just got away with the film by giving tunes that other filmmakers rejected or stayed in his bank for a long time. It is hard to call it bad. Hence the right word would be 'Disappointing' or 'Dis-interesting'!