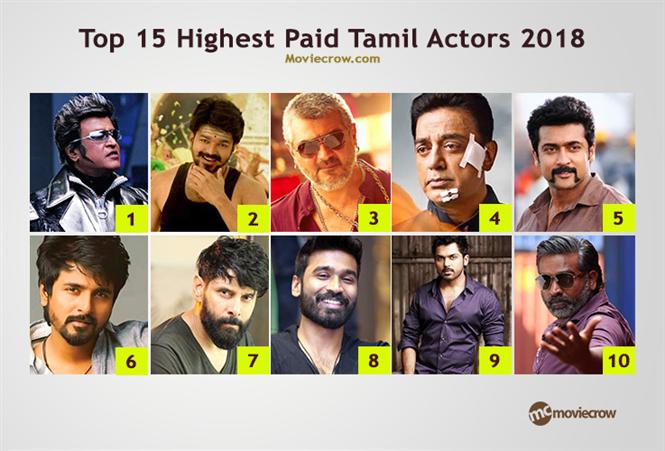 With the introduction of Goods and Services Tax (GST) and salary of leading film stars taking up a sizeable chunk of a film's budget, Tamil industry is going through an extremely difficult phase with no recovery at sight. Tamil actors are holding on to their remuneration tightly despite pressures. Let us look at the list of top paid actors in the Tamil Film Industry.

Although Rajinikanth has announced his political entry, he still occupies the numero uno status in the tinsel town. He is said to have been paid between ₹40-50 Crore for Kabali, and between ₹50-60 crore 2.0 & Kaala. He has also signed a film for Sun Pictures, which will be directed by Karthik Subbaraj. Thanks to Rajinikanth's pan-India reach, the star has consistently occupied this top rank for over 25 years now.

With every hit, Vijay's market is consistently expanding and his films have been setting new box office records across the globe. After Mersal's blockbuster hit, Vijay has bumped his salary significantly for his upcoming movie with AR Murugadoss and he is said to paid around ₹35 Crore.

When it comes to Ajith, hits or misses don't determine the opening of his next film. Hence, producers are willing to pay ₹30 Crore to Ajith, a single man army who can command a massive opening worldwide.

Biggest surprise in the ranking this year is that of Kamal Haasan's salary, which has trended in the opposite direction as Rajinikanth's. Kamal Haasan's career has seen a sharp decline in his market value in the last couple of years. That may explain his unexpected shift to reality TV show and political entry. The unofficial sources reveal that he was reportedly paid ₹15 crore to host 30 episodes of the reality TV show Bigg Boss Tamil. Thanks to the much expected Indian 2 with Shankar, his salary is back in the ₹20 Crore bracket.

Suriya has been maintaining his salary steady with most of his recent movies produced by his own home productions. Suriya is having a lukewarm responses for his previous 3 films (24, Si 3 & Thaana Serntha Kootam) with his Telugu market dropping sharply.

Sivakarthikeyan's ever-growing popularity among families and kids has guaranteed a solid opening for his films. With Sivakarthikeyan showing maturity in taking on more meaningful and social theme movies, his films continue to enjoy high occupancy rates across all centres. All his films since 2013 have been reportedly profitable even though he may have to shell out a portion of his salary during pre-release the movie. Sivakarthikeyan is seen as a bankable star on steady rise.

Vikram's box office success may not be remotely proportional to his acting prowess. Without a big blockbuster hits to his credit in recent times, Vikram is now left with two big projects (delayed Dhruva Natchathiram and Saamy Square). Also, the actor is also focused on his son Dhruv's career and waiting for right projects to come along.

Dhanush compensated for Thodari's lukewarm response with Kodi in 2016, while the laurels for his directorial debut Pa. Paandi didn't last long when he followed it up with his supposedly ghost-directed VIP 2 in 2017. His 2018 looks promising with Vetrimaaran's Vada Chennai. However, his much expected Gautham Menon's Enai Noki Paayum Thota is already feeling a bit stale out with songs on the air for a long time with no visibility of a release at sight. This naturally talented actor also has his first Hollywood film up for a release.

Except for Mani Ratnam's Kaatru Veliyidai, all his recent films have been for his home banners. That again makes it difficult to know Karthi's true market value. His recent cop flick Theeran Adhigaaram Ondru turned out to be one of his career best for him after a string of not so exciting outings at the box office.

Vijay Sethupathi's script oriented and experimental choice of movies may be a dampener in terms of bumping up his salary. He had a dream run of hit films like Sethupathy, Kavan and Vikram Vedha in 2016 and 2017, but his recent movies Oru Nalla Naal Pathu Solren and Karuppan have pulled him back from getting into the next league. Vijay Sethupathy claims the distinction of being the Tamil actor with the highest throughput of more than 10 movies within a span of 2 years.

Vishal is more active in political aspects of cinema industry. Unfazed by the fact that none of his recent movies have gone on to become clear hits, Vishal is confidently holding on to this salary bracket by acting mostly in home banner projects. His upcoming films include Irumbu Thirai and Sandakozhi 2.

Achcham Yenbadhu Madamaiyada helped put a doorstop to STR's career. Anbanavan Asaradhavan Adangadhavan almost put an end to his career with the talks of Tamil industry issuing a ban until he fixes his unprofessional ways. But Mani Ratnam's Chekka Chivantha Vaanam is expected to give a much needed relief for STR, who is caught in a myriad of controversies.

Although Arya is known as one of the friendliest and most flexible actors for producers to work with, most of his films haven't been able to succeed at the box office. Hence, his asking salary continues to hover around ₹2 Crore.

Madhavan's back-to-back hits, Irudhi Suttru and Vikram Vedha, have put him back in the limelight again. His web series 'Breathe' for Amazon was also received well by the movie buffs. He is next acting in Gautham Menon's Ondraga, which is reportedly the sequel to Vinnai Thaandi Varuvaayaa.

Siddharth, Jai and Jiiva earn slightly north of ₹1 Crore per film. GV Prakash and Vijay Antony charge up to ₹2 Crore for combo package along with musical duties. Prabhu Deva is making a comeback with renewed energy in a number of new projects, and he is paid around ₹1 Crore per film. Udhayanidhi Stalin acts only in his own productions and takes home well below ₹1 Crore as salary. Other heroes including Vikram Prabhu, Vishnu Vishal, Krishna, Gautham Karthik are also paid below ₹1 Crore per film.