Karthik Subbaraj's pathbreaking Pizza completes 50 days today. 2012 has been a great year for small films so far with many movies getting acceptance from common audience. Pizza has come out on top among all small budget digital movies released this year by becoming a solid HIT through a spectacular run at major multiplexes. Thanks to excellent word of mouth from all quarters.

Pizza was recently selected for South Asian Film festival under the competition section which will be happening in Paris in 2013, January. PIZZA is also one among 12 films selected for 10th Chennai International Film Festival, under competition section. During the awards season, Pizza is expected to take home a good number of awards.

Cine industry members did not hold back their praise for Pizza. To name a few, Rajinikanth termed it as "Excellent". Samantha said "The most amazing film in a long time, Crazy Brilliance". Prasanna called it "mind blowing". Siddarth said "genre bending piece of tongue in cheek bravado". UTV Dhananjayan praised "One of the best & intelligent thrillers to come in Tamil cinema".

There is also unconfirmed news that Pizza may be remade in English in association with a Hollywood production house retaining the same technical crew. Congrats on well deserved success. 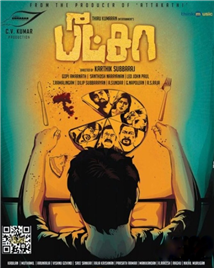