24, starring Suriya and Samantha in the lead roles, is directed by Yaavarum Nalam fame director Vikram K Kumar. The post production of the movie is progressing at a brisk pace in Mumbai. Earlier, the makers were planning to release the movie on April 29. However, due to extensive CG Works, the movie release is now pushed to May 2016. Music for the film is scored by AR Rahman. The audio of the film will be launched on April second week. The movie is jointly produced by Studio Green and Suriya's 2D Entertainment. 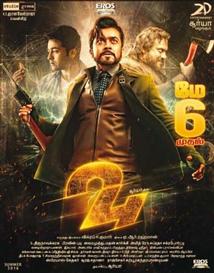