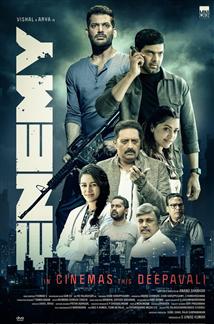 A Predictable Tiff Taking Place In A Comfort Zone

The major part of the film is set in Singapore but it almost feels like it is set in a fantasy city that seems to revolve around only the characters the writer decided to feature. This restricted scope makes you question the various loopholes the story casually offers every now & then. The film lacks intelligence in writing and eventually takes the viewers' intelligence for granted (more)

Vishal and Arya keep locking horns in this trite action drama, but we don't care why

There are a lot of questions you might get watching Enemy. The answer always is: He is the hero. For example, Chozhan runs a supermarket. How did he get the necessary equipment to break into a building Mission Impossible style? Answer: Chozhan is the hero, he can do anything! He can get planes to wait for him like it is a bus. He can get cranes to come from nowhere. How did Chozhan find out about Rajiv's personal life, something the latter has hidden from the entire world? In this universe, police are mere gun dispensaries for both Chozhan and Rajiv. But obviously, one should not question all this. It is the experience that 70 years of Tamizh cinema has trained us for.(more)

Director Anand Shankar builds up the film with several interesting elements which makes the first half fairly engaging, setting up a solid groundwork for the faceoff. However, in the second half, the cat and mouse game isn't packed with solid moments to hold your attention. You pretty much know how Arya's character is going to react to a situation and how Vishal's character will respond. This is where the screenplay faces issues and as a result, the film becomes a mixed bag.(more)

Director Anand Shankar establishes the core plot of the film in the initial twenty-five minutes. The writing is solid and organic in these portions. We can relate with all the main characters of Enemy from the word go! The two kids who have acted as the young Vishal and Arya are good. Vishal looks earnest in Enemy and shines as Cholan, an obedient son yet a risk-taker for the Tamil community. As usual, his tall physique helps him with the action episodes. Arya looks bright and powerful in the author-backed Rajiv, he effortlessly carries the film on his shoulder as the main antagonist. Mamta Mohandas's role is yet another sweet surprise in the film. Veterans Prakash Raj and Thambi Ramaiah are perfect. (more)

The film's screenplay suffers from predictability but still ends up engaging us. Some of the scenes in the first half look out of place but have relevance towards the end. But since they are out of place, they look forced, and we know that they are going to reappear as references in the second half. Although the film looks like it's intelligently written on the surface level, when you go deeper, the flaws are glaring.(more)

Like a Deepavali firecracker that sparks for a long time, raising our anticipation, only to fizzle out, the film starts to fumble after this promising build-up. Anand manages to keep us guessing on a few occasions. For instance, just as we predict the film to be a game of oneupmanship between a cop and a thief, we are proven wrong.(more)

The ideology behind the film on how a child grows up to be a good or bad person looks interesting on paper, but the way these contradictions have been translated on screen through the situations in the latter half looks bleak. If the build up to this idea had been fresh, this thriller could have gone a mile further and worked well.(more)