A crazy attempt that would strike a chord with those love madcap humour!

ONNPS might have issues and whether it comes together as a whole is a tricky question . But it is one crazy attempt and was a riot for me for the most part.(more)

The film, in fact, brings to mind Sutta Kadhai, another comedy set against the backdrop of a tribal area. Like that film, this one, too, is an overlong comedy that is a misfire despite its ambitions. (more)

A film that never takes itself too seriously

Sree Saravanan provides colorful and dark visuals to suit the backdrop of the story and the production design in the tribal village is commendable. Overall, Oru Nalla Naal Paathu Solren is a film that never takes itself too seriously, so if you like the genre, go watch it.(more)

Insanely funny, but only in parts

Oru Nalla Naal Paarthu Solren works to an extent thanks to Vijay Sethupathi and some laugh-out-loud portion. It could�ve been funnier, given its potential.(more) 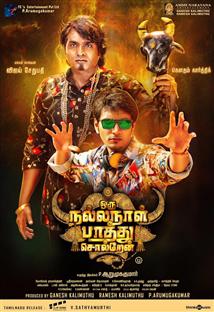