Kazhugu is a dark themed comedic thriller set in Kodaikanal, India directed by debutant Sathyasiva and performed by Krishna, Bindu Madhavi, Karunas, Thambi Ramaiah and Jayaprakash. Kazhugu, stands out in his interesting premise threading around the people who retrieve corpses of people who have committed suicide 4000m down the hills of Kodaikanal. A unique backdrop which is safe to say that have not been explored in films yet. So how far have debutant Sathyasiva handled and executed this theme?

Quick Synopsis: Kazhugu starts of by establishing the lives of a carefree youngster Sera (Karthik) and his friends Shanmugam (Thambi Rammaya) and Nandu (Karunas) who work as corpse retrievers from the suicide point at Kodaikanal hills. One of such corpse happens to be Kavi’s (Bindu Madhavi) sister and she starts to develop a feeling in Sera (who does not believe in the word, love) slowly.  Meanwhile the antagonist of the story, Ayya (Jayaprakash) is established as a tea factory owner, who also indulges in underground illegal activities. How their life gets tangled forms the crux of the story.

Like mentioned earlier, Kazhugu’s unique selling factor it’s the backdrop which centralized about the corpse retrievers, and it has made rooms to explore the true value of love and human relationships. The director has taken a heavy backdrop but eased it extremely well with the light hearted characters. Moreover he also has tried to inject laughter even in the topic of death. The three corpse retrievers having simply cynical views about love and death is something fresh. The director’s decision to show the transition of the novelty of love in the three generations is pleasant to watch. Another positive factor will be the placement of the songs which actually makes the characters strongly established, rather than acting as a speed breaker like other commercial films. Yes, Kazhugu also has some commercial values injected to it such as the loop holes of the policemen easily letting off the corpse retrievers just because it will affect their flow of bribery. But most of the commercial elements get blended with the film well.

However, Kazhugu disappoints thoroughly at the second half. The main problem starts off with the female protagonist character design, as she easily falls in love with Sera without any well-established reason or moments. Therefore the ‘love’ factor can only be felt at some moments and mainly due to the music and the performance. Antagonist Jayaprakash character is not well driven at all and looks very half-baked forcibly injected to the film just to have a conflict. This acts as one of the main downfall for the film.

One of the main strength of Kazhugu is its casting and performance. This film is undoubtedly Krishna’s best till date and certainly will fetch him recognition as a promising fine actor. From the way he walks to the way he speaks, shows the transformation he have went through to live as ‘Sera’ in the film. Bindu Madhavi also impresses with expressive eyes and gives her best too. Thambi Rammayah and Karunas are at their usual best and form a pillar of strength for the film with their excellent rendition of the characters. Jayaprakash is not bad in a restrained role. Even the smallest character in Kazhugu has performed well which just sparks the mettle of the director.

DOP, Sathya’s camerawork is certainly the biggest strength to Kazhugu, portraying the misty Kodaikanal as enchanting as possible. Sathya also does well in song sequences, capturing the dark theme as captivating as possible. Editing by Praveen & Srikanth is sharp and crisp. National Award Winner, chorographer Dinesh also impresses in bringing some natural but interesting steps which will surely be a rage among the audiences. Yuvan’s BGMs highlight the romantic moments of the film very beautifully but besides that an average job. However he scores well in all the songs, as ‘Ambalaikum Pomabalaikum’ and ‘Pathagathi’ stands out the most. In overall, honestly the technicality departments have really salvaged Kazhugu at many parts.

Kazhugu is a well-researched and a unique attempt by Sathaysiva and he has really made an ‘Above Average’ debut with this film handling the actors and the technical team marvellously. However as a writer he has thought out an interesting backdrop but has failed to utilize to its fullest. The main problem with the film is that when the film ends, one might not feel the actual sympathetic feel the director have intended, mainly due to the shaky screenplay at the second half and the feeble antagonist character. However all said, in overall Kazhugu could have been really a cult classic if the screenplay could have been better. Nevertheless, it is a neatly performed and technically executed film.

Verdict: Good, but could have been much better. 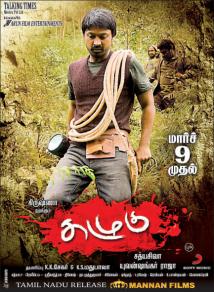