I Review - Shankar's Beauty and the Beast

I Review - Shankar's Beauty and the Beast

There is no secret that Ai is loosely based on the story of "Beauty and the Beast". The story itself is nothing new and has been told many time over ages and multiple cultures. What is different in this edition is Shankar has mounted this simple heart-touching story on a mega budget pedestal. Did the master story-teller Shankar yet again succeed in keeping the audience engaged and send home satisfied?

The morale of the story is simply how pure love and sacrifice can overcome prejudice and evil. Shankar has taken this basic premise and envisioned a script in his characteristic grandeur style throwing in a lot of digital trickery, exotic locations and a lot of fist-pounding action scenes involving multiple villains. What was gained in terms of grandeur and richness was exchanged for loss of core message heart-felt impact. Shankar's screenplay to narrate the story in a non-linear going back-and-forth makes the proceeding rough. The decision to reveal the looks of hunchback character in the very first scene takes away the impact and sympathy in the second half scenes when Vikram looks at the gym mirrors to realize what he has eventually become. The dialogues by Suba have occasional sparks of brilliance. For a movie that is all about outside appearance doesn't matter ends up sending a mixed messages when it makes fun of transgender and even worse, villify the character. Despite the challenges in narration and screenplay, To give the credit where is due, Shankar deserves applause for bringing world class technical wizardry and for daring to dream big with the financial backing from the producer.

Vikram's amazing level of dedication deserves a standing ovation. How this man could sacrifice to transform himself to such extremes in one movie by gaining bulk and losing so much mass. In the initial portions, his role as a body builder is believable as he flexes his muscles competing with all the professional body builders. It requires extreme patience to sit through hours and hours of Weta's make-up every day of shoot. It is even more difficult job to express through his eyes between all the unrecognizable layers of make-up. Only downside is Vikram's Chennai Tamil could have been toned down a bit as his method acting and delivery begin to sound tiring after a point. Amy Jackson has shown a lot of improvement. Amy could wear such minimal clothes in "Ladio" and "Mersalayitten" songs and still look glamarous and not one-bit obscene. In this movie, she has tried her best to look and emote like a native person irrespective of her Caucasian complexion. Our audience will get a kick out of the scene where she speaks in local Tamil matching word-for-word with Vikram.

The movie has a long line-up of villains and they all have different reasons to go after and bring down the protagonist. Suresh Gopi has done his part well even though one could guess his intentions right from the beginning. Ramkumar, son of Sivaji Ganesan, sports the look of Vijay Mallya. Ramkumar and Upen Patel play their part adequately in key roles. Thanks to Santhanam for lightening the mood whenever he appears on-screen. His one-liners ensure that there is a steady dose of laughter whenever he shows up. "Powerstar" role was shot during his brief peak period of popularity. The fad disappeared so quickly that many of the dialogues in the movie now look outdated.

AR Rahman's background score help a lot in building the momentum despite being loud at some occasions. AR Rahman had a few chart buster songs in this album. A couple of songs look great aided by rich visuals of PC Sreeram. The range of PC Sreeram's camera work while showing the local gym/housing board to exotic Chinese locations and all the bright and colourful advertisement concepts in songs. PC Sreeram disciplined lighting ensure that the Weta Workshop's prosthetic makeups look believable and real throughout. Art director Muthuraj has done his part well in setting up the hideout place and also song sets shown in "Ennodu nee". Action sequence in the gym and the cycle chase in China are choreographed well. The dance choreography are well executed. However in the second half, the actions and fight sequences get a bit repetitive and towards the end really tests your patience. The costume designs are aesthetically done for Amy Jackson. The credit for convincingly showing the transformation from a local body builder to Mr.Madras to popular all India model is made possible through the costumes, hair and makeup departments.

The movie's length of more than 3 hours is the main weakness. At least 20 minutes should have been snipped mercilessly. The movie's screenplay could have been more linear to get the message across straight to heart avoiding all the back-and-forth narration which not only takes away the key surprise elements but makes the scenes predictable from the beginning. The revenge part works well and gets diluted by the time the story gets there. It is appalling that there are dialogues making fun of physical deformities and disabilities of characters which go against the fundamental concept of the movie.

Shankar's magic may be missing in his latest edition. However, the movie has enough merits to warrant a watch at the theatres.

Write your own Review for "I" 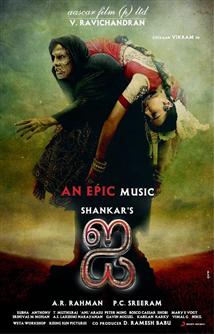