Maan Karate Review - Not as smart

Maan Karate is a form of karate technique inspired from the attributes of a deer. The technique focuses on being flexible in maneuvering out of situations and not about landing big punches. Similarly,  Sivakarthikeyan does not face challenges head-on. But, always tries to wiggle his way out of situations by avoiding or pleading. This sort of forms the crux of Maan Karate.

The title tries to summarize Sivakarthikeyan's character in the movie. Sivakarthikeyan plays the usual jobless dude making wisecracks from start to finish. The lead now tries to become a boxer to woo his love interest, Hansika, who is deeply interested in sports. There is another angle involving his clairvoyant friends who knows that Sivakarthikeyan is destined to win a fortune.

It is difficult not to wonder what the heck the writing team must be smoking when they came up with this story? Even if you convince yourself to overlook the basic premise, the subsequent situations are implausible and forcibly stitched. The notion that Sivakarthikeyan with no formal training in boxing can defeat a professional boxer is far-fetched. The writers seem to seriously believe that if one is instigated, challenged, insulted and pushed to the brink, a person can achieve anything beyond one's physical limits. The script takes a lot of liberties and takes logic for granted.

A number of scenes and situations are heavily contrived and childish. The first half scenes look more like amateurish skits borrowed from college culturals. Despite many of the scenes being out-of-place, the comedy quotient may entertain you in some places. The flatulence joke in the elevator could have been avoided.

Sivakarthikeyan does not show much variations in his acting abilities. But, he makes vast improvements in dancing department. After this movie, there should be very little doubt in anybody's mind whether the TV Star is a hero material. Sivakarthikeyan is fluid in his dancing and will impress you with his confidence and body language especially during the song sequences. Hansika is charming and has shed a lot of pounds as she sashays in "Darling Dambakku" song. Satish plays second fiddle as a comedian to Sivakarthikeyan. The ever-angry villain Vamsi Krishna's characterization is confusing as he kills other fighters in the boxing ring through his deadly punches and later displays softer side as an understanding husband and then quickly switches back to his callous behavior.

Sivakarthikeyan desperately works very hard to showcase his acting chops. One scene that sticks out like a sore thumb is when Sivakarthikeyan breaks down begging to the villain to withdraw from the final championship title. It would make you squirm at the hero's characterization and may even shift your loyalties towards the villain. Sharper editing would have given the audience some relief and would have been a saving grace for Sivakarthikeyan. Rest of the cast members do not make a strong impression.

Latest hit wonder Anirudh's music is definitely an asset since the songs are recognizable as you walk in to the movie. The choreography gels with the music and highlights Sivakarthikeyan's prowess in dance. The background music tries its best to provide some credibility to ridiculous scenes and situations. Cinematography, editing and other technical department do their parts. Sivakarthikeyan's colorful, vibrant and trendy dressing is in sharp contrast with the usual jobless-next-door boy character. Anirudh and AR Murugadoss try to amuse the audience with their cameo appearances in 'Open the Tasmac' song.

Bottom-line -  Maan Karate is not as smart as the title suggests! 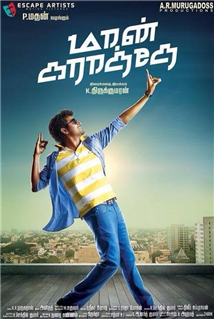