Irandam Ulagam is selvaraghavan's dream project. It appears that Selvaraghavan must have in fact scripted the story in his dream. Selva's courage to bring an out of the world experience for the audience should be applauded; But, the execution falls way short in realizing this vision.

Selvaraghavan wanted to portray the concept of how women would be treated in a second world where men have not experienced the feeling of love. The story is all about a man from Earth(Arya) who gets mysteriously transported to the second world ends up infusing love and makes the flowers bloom for the first time.

Irandam Ulagam falters throughout its laborious running time of 2 hours 40 minute. It is odd that a movie about "pure love" doesn't have a single scene that conveys the feeling of love effectively. Selva's script is unconvincing, characterizations are weak and screenplay is not taut enough.

Right when you begin to invest in the characters residing in one world, the director switches to the other world. And then this is repeated back and forth until the first half draws to a close. The second half is entirely set in the second world where the audience will be subjected to a number of weird things such as white men speaking fluently in Tamil. There is a healing "amma" character in the second world who has some magical powers because of which bad people try to kidnap her.

It is certain that Selvaraghavan's cult followers will come up with hundreds, if not thousands of justifications and explanations for the subtext behind every scene. However for the common man, many things that happen on the screen is as clear as mud.

Many of the actors have performed amateurishly and do not lend any sort of credibility to the already incredulous story. Arya lacks the acting ammunition to salvage difficult scenes. Arya's dialogue delivery brings unintended laughter among audience during inopportune moments.

Prior to the movie release, Selvaraghavan went gaga about Anushka's acting skills and how he was able to extract the best out of Anushka while taking pot shots at the film-makers who have used her only as a glam-doll. One may wonder whether the Anushka scenes that Selva is probably referring may have come under scissors at the editor's table.

The expressions and voice dubbing for many of the characters, especially white men in the second world, is often out of synch. It is sometimes annoying once you start noticing that the same dubbing artists were used for multiple characters intentionally (e.g., Arya's father characters in both the worlds).

One scene that deserves special mention is when Arya fights the wild animal which is convincingly done even though it doesn't bring out jubilant reactions among the audience when Arya overpowers the creature. Otherwise, the computer graphics and post production processing look mostly unimpressive unless the viewer wants to give grace points for the efforts and just because it is a Tamil movie with tight budgets. The overall output that you see on the screen is a far cry from what our audience may have already experienced in scores of Hollywood movies.

Ramji's camerawork is uniformly good whenever the scenes are devoid of obtrusive post production works. It is evident that a number of daylight scenes were converted to night effect scenes to facilitate post production graphics.

Anirudh's background score is a let-down and sound dissonant during many of the scenes. This is not an easy movie to do background score due to emotions that cannot be easily expressed. It appears that Anirudh may have struggled to understand Selva's cryptic vision of what he was trying to accomplish.

Some of the chartbuster songs (e.g., Kanimozhiye) were not picturized well and did not do justice to Vairamuthu's visually poetic lyrics. Harris Jayaraj's decision to not score the background music after watching the first copy may not be the most ethical thing to do. In the hindsight, this is a smart escape plan by Harris who would have been severely criticized for movie's shortcomings if he had actually done the background score.

The real creative people have courage and conviction. There is no doubt that Selvaraghavan has got it in loads. This movie could have been an out-of the world experience for the viewers IF only Selva had gotten his execution right. For now, Irandam Ulagam just happens to be an expensive experiment resulting in an unrealized vision. 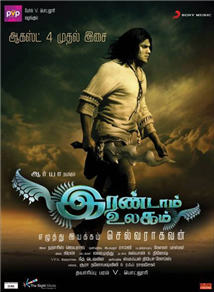