Karthi's Azhaguraja is expected to be out of box office by end of this week. But, the problems appear to not go away soon. Prior to release, Studio Green was promoting the movie in posters and trailers as "All in All Azhaguraja". But at the time of release, the production house applied to certification certification as "Azhaguraja" without the "All in All". The entertainment tax waiver was also given by the state review committee based on the Tamil title.

A few days before the release, review committee noticed the change and asked for clarification regarding this inconsistency. To avoid trouble, the production house made changes to all the promotion materials a couple of days prior to release.

It is reported that the problems did not go away after removing "All in All" even after release. The state review committee sent a formal notice to the production house repealing the entertainment tax waiver amount (30% of revenue). It is also believed that a penalty has been slapped on top of the revoked entertainment tax amount.

Studio Green has been reeling from losses due to Azhaguraja's poor performance. Most of the box office losses are absorbed without much noise from distributors since the production house had released it on their own in most of the territories. This latest problem has added insult to Azhaguraja's injury. 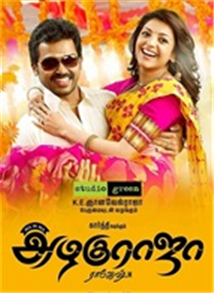