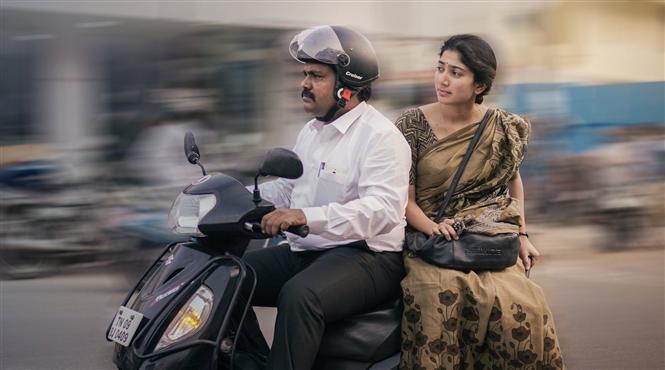 Sai Pallavi plays a simple middle class woman who works as a teacher in a Government school. Suddenly, one night her dad is accused of gang-rape charges, he is proven in the court to be guilty. But Sai Pallavi firmly believes her dad is a man of values and reopens the case. What happens in this sensational case forms the remaining story.

Director Gautham Ramachandran’s smart work is evident from the opening scene. He presents a side track from Gargi character’s childhood, chooses an interestingly designed underdog Kaali Venkat for the lawyer role as the audience will want him to win the case, Aishwarya Lekshmi as a news reporter realizes at one point that she urged to expose a false news for her channel publicity, these factors are used to tease the audience and keep us stay away from predicting what has actually happened. The characters are beautifully established in the first half, the inhuman crime is strongly registered and emotionally impacts. The drama peaks during the pre-interval stage by a stunning courtroom argument sequence. Clap-worthy dialogues are effortlessly placed, guaranteed goosebumps when some bang-on law points are addressed, and the staging for it is done from the beginning. Second half is decent, the proceedings are not as great as the former half. The latter becomes more cinematic during some big reveals. Also, the place and time of crime is very much questionable with respect to the logical factors. Conveys a valuable life message subtly in the end and thankfully there’s no lecturing. Wise choice to reveal the face of the victim only after justice is served.

Sai Pallavi yet again impresses with her sensible script choice, she handles the emotional baggage her character carries in the movie in a very mature and measured manner. Hands-down, this is one of her best performances. Kaali Venkat springs a surprise by his superb acting, mannerism, etc. His character is easily the most relatable, lively and likeable character in the film. Casting a trans woman for the judge role is a mind-blowing move, she gets great applause in an important scene. Plenty of other artists were perfectly picked for their respective roles, each one of them have done complete justice to the job given, which eventually helps the film big time.

Govind Vasantha’s songs aren’t really that impressive, the soul is missing. But he has made it up with his background score that speaks volumes, also silence is used as an effective tool. Topical camera work, great close up shots adds immense value to the depth of the emotions. Neat editing as there is nothing much to complain about. Great in terms of sounding, the effects are used perfectly, creating that tension wherever required.

There are a few lags post the halfway mark and the big reveal could have made a stronger impact. Still, keeping aside some small flaws, Gargi is a very well written emotional legal drama. With an absorbing first hour and a decently engaging second half, it’s definitely one of the very few solid-watch films of the year.