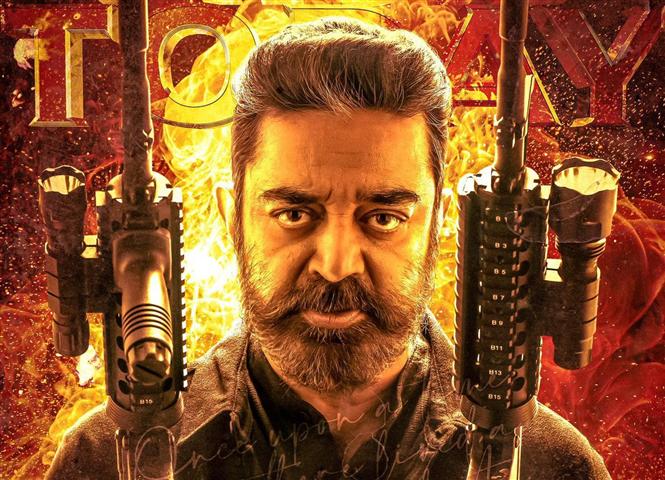 Vikram [2022] is a mega-biggie starring Kamal Haasan, Vijay Sethupathi and Fahad Faasil in the lead roles. Suriya makes an important cameo appearance. Like all the recent big ticket Tamil flicks, Anirudh has scored music for the movie. It's a Lokesh Kanagaraj directorial, which is said to have plot links with one of his previous flicks Kaithi [2019]. Now let's get into the world and see whether the film has fulfilled its pre-release expectations.

A group of masked men involve in a sequence of murders, wanting to make a statement. Kamal Haasan is also one of the victims. Fahad Faasil is brought in to investigate the crimes and accomplish the mission. And, Vijay Sethupathi is a drug peddler and how is he involved in the story is revealed in the interrogation process.

Director Lokesh Kanagaraj has created a brand of his own, he has used it smartly here by forming a universe kind of the film. The idea is exciting, what happened to Narain’s character after the Kaithi incidents and how has evolved in the story here is beautifully showcased. The first half is pretty much engaging, the investigation portions are somewhat decent and the film doesn’t bore out anywhere till the interval point, the prostitute angle was solid though. However it doesn’t keep us invested or intrigued because there’s one major issue with the basic arc of the first half, // Mild Spoiler // which is… Kamal is said to be murdered in the very first scene, they don’t show his body or anything, so everyone knows he’s gonna be back alive and kicking, and the interval point is what they believed as a big reveal. // Spoiler Ends //  The second lacks the gripness and the punch is heavily missing, things happening on-screen don’t excite much and we get a sense of disconnect. The second half filled with action sequences, with just people trying to kill each other with a guns or knives, there’s no brain behind it. Kaithi was an outright action, but it had strong situations and smart sequences coming all the way, but it’s absent here. And people who expects too see actors sharing screen spaces in a single frame might get disappointed.  Even Suriya’s cameo appearance, which is a theatrical moment wasn’t any special to the script. There are some pleasing theatre moments here and there, but they aren’t converted as full-fledged scenes. Thankfully there’s one ultimate unexpected sequence in the second half and that was a blast.

Kamal Haasan has less screen presence in the first half, but he’s throughout the second half and he gets a whistle-worthy closing frame. The man has a macho presence and it’s good to see him back in action. Fahad Faasil is very neat in his role, he’s gotten the best characterization out of the three leads. Vijay Sethupathi has put in a lot of effort to change his body language, but for a villain role, he isn’t that menacing. Lookwise, Suriya looks ferocious, but there’s nothing beyond a cool slow-motion intro for him. To be honest, there are no such show-stealing performances in the film. The characters are not written strongly, so how much ever the artists try, the result is on the ground level.

Anirudh is the soul of the film. Hats-off to his musical contribution, he is truly the pillar of support. The songs have a nice variety and are good along with the visuals as well, the opening dance number is enjoyable on the big screen. Background score is topical and Ani has given his utmost best to elevate the sequences. Night sequences are difficult to present, Girish Gangadharan has done it with ease. The usage of new-age cameras are evident during the action scenes. But wish he had captured the ones with big guns in a better manner. Highly appreciable and neat editing, especially the first half has a variety of story angles, but they’ve been delivered neatly in one piece. Anbariv’s action choreography plays a major role in the film, the stunts are decent, the choice of guns are interesting.

An action flick that excites a lot from the outside by having an ensemble cast, music, etc. As a premise Vikram is interesting with a lot of layers and angles, but the presentation falls short of a solid punch. A dark passable actioner that serves only to an extent with quite a few clap-worthy theatrical moments.