Naiyaandi Review - Joke is on YOU

Naiyaandi is an uninspired remake of Jayaram's 1993 Malayalam super hit comedy movie "Melepparambil Aanveedu". Since Tamil movies are currently riding a comedy wave, the director Sargunam dug up the script from two decades ago, hopefully paid for the rights and loosely adapted the movie to fit the Tamil mileu.

After watching Naiyaandi, viewers will have a number of questions cross their minds -- How did the two National Award winners, Dhanush and Sargunam, manage to give such a damp squib? Secondly, what must be going on in Dhanush's mind when he decided to take up this project?

The movie is a slapstick comedy filled with tongue-in-cheek humor. The problem is that many of the scenes fail to even bring a smile on your grim face. Sargunam is terribly out-of-form right from the title cartoon card till the end card with rolling credits. The director probably thought he could easily remake a successful comedy movie and quickly deliver a hit instead of slugging it out by taking up social causes as he did in Vaagai Sooda Vaa. This is the same pattern of mistake that director Suseendiran had also committed in Rajapattai right after his Azhagarsamyin Kudhirai. Naiyaandi yet again proves to our wannabe commercial film-makers that making a good comedy movie is no joke.

The songs are forced, pop abruptly and often fail to match the mood of the scenes preceding the songs. Majority of the songs are set in Europe to give a false sense of big budget-ness. Even the naive viewer can clearly notice that a small team of cast and crew members must have gone to Switzerland for a week and hurriedly canned 3 out of 5 songs in the movie. Ghibran needs to work on his background scores. Some of the BGM tracks will annoy the audience since it repeatedly re-uses old Tamil songs/tunes in a desperate attempt to be funny. Velraj's cinematography is a big let-down with many underexposed shots and harsh lightings on lead pairs.

2013 has been a dream year for Dhanush with a fantastic debut in Hindi through Ranjhanaa followed by a mind blowing performance in Maryan. In Naiyaandi, Dhanush doesn't even a single scene where he is offered the scope nor the opportunity to soar high with his performance. Unfortunately, this will be a forgettable outing for the talented actor.

Among the comedians, Suri and Imman Annachi do their usual part in providing some comic relief during the first half. As Dhanush's bachelor brothers, Sriman and Sathyan try to be funny and they might successfully manage to tickle you a few times during the second half as they try to woo Nazriya (not knowing that their younger brother is married to the heroine).

The only person who deserves some form of credit is Nazriya. She manages to engage the audience with her expressive eyes, spontaneous acting and confident screen presence. It comes as a surprise that this is only her 3rd Tamil movie after Neram and Raja Rani. Thanks to her many years of experience as child artiste and her compering roles in Malayalam TV shows.

Regarding the much discussed controversial scenes, there are exactly 3 belly button scenes in the "Inikka" song. One would wonder why did Nazriya make so much fuss and noise about such a trivial issue. Earlier this week, Naiyaandi had the lowest buzz among recent Dhanush starrer movies. Director and producer should thank Nazriya for creating a mountain out of mole-hill. Without Nazriya's contributions in stoking the fire, the movie would have sunk even without take-off due to poor word-of-mouth expected post release.

Final Word : "Naiyaandi" is on YOU. 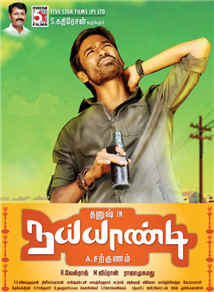