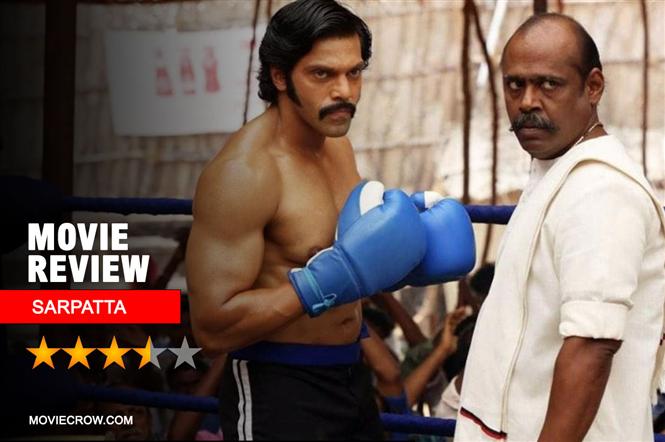 If you were already excited for Sarpatta Parambarai after its trailer, the initial minutes of the film doubles up your excitement. We are introduced to the boxing set-up in the Madras of the 70s and the people vying for glory inside the ring. The craft on display sucks you in. This portion that works like a preface for what is about to unfold feels like that walk you have around a lavish buffet spread. Mouth-watering prospect is the word.

Sarpatta Parambarai isn't telling you a new story. It follows the template of the underdog sports drama but there are small surprises right through. The first is how Kabilan (Arya) rises in the boxing ranks in no time. You would expect the underdog or the outsider to rise up after few blows but here Kabilan is punching down the best in the business without breaking a sweat. You might think where is the excitement and tension when the going is easy. But the first half of Sarpatta Parambarai moves at such a brisk pace and the duel between two heavyweights that you expected would be the climax, happens midway in the film. In the 'rise - fall - recuperate' template of a sports drama, the rise happens easily in Sarpatta Paramabarai. But surprisingly, this is the best stretch of the film.

Kabilan might be at the centre of the film but it is the characters around him that bring colour and flavour to Sarpatta Parambarai. In a way, Rangan Vathiyar is the hero of the film and Pasupathi is terrific in this role. In a film with brilliant performances from almost everyone, he tops the list. Arya's physical prowess is what comes to the forefront in the film and he also does a good job in bringing out the naive facet of his character. This is certainly one of Arya's better performances and a rather convincing portrayal but his emotional scenes just about pass muster. John Vijay as 'Daddy' and Shabeer as 'Dancing Rose' are the other memorable characters. The 'Kabilan vs Dancing Rose' duel and the lead up to it is a blast. The women in Ranjith's films always have an agency and Sarpatta Parambarai is no different. Dushara Vijayan, Anupama Kumar and Sanchana Natarajan have atleast one scene to show their mettle. In fact it is they who speak the most sensible lines in the film. The best one is when Mariamma (Dushara) says to Kabilan that boxing is just a game and there is no shame in losing. Why confuse a 'game' with 'pride' and why link 'pride' to your 'clan'?

Technically, Sarpatta Parambarai is a beast. Murali G, Selva R.K. and Santhosh Narayanan are the pillars of the film.This is a visually stunning film and could have been such an experience at the cinemas. The boxing duels are superbly shot and edited. The chaos both inside and outside the ring is captured in all its glory. You experience the madness and chaos of the milieu but there is also absolute clarity. At any point in the film, there is so much happening on the screen. At many places, there are multiple interactions going on between many characters. Look out for that scene where Rangan Vaathiyar announces that Kabilan will be taking on Vembuli. This means so many different things to each of the characters and all this is established simultaneously without the camera panning into close ups. It is as though you are in that meeting and you know the characters personally and are observing each of them keenly. This is Ranjith the craftsman in top form.

The film does lose some grip towards the end. The important events that lead characters to make certain decisions don't seem to happen as organically as they happened earlier. Now it feels more like 'been there, done that'. The climax is again well shot and does end on a reasonably high note. But the high that you felt during the earlier Kabilan vs Vembuli duel is missing. This one feels like a foregone conclusion.

And for those interested in decoding, Ranjith does have enough in store. Pictures of leaders and politicians are at the background at various junctures. And being set around the period of Emergency in the 70s, Ranjith registers few historical happenings as well and links them to the central plot.There is this character who models himself on a yesteryear superstar. And finally Kabilan does don blue before the climax fight.

Like any sport, this clash of the clans has its highs and lows but makes for a rousing watch. Pa Ranjith is in command over the medium and delivers a solid punch!