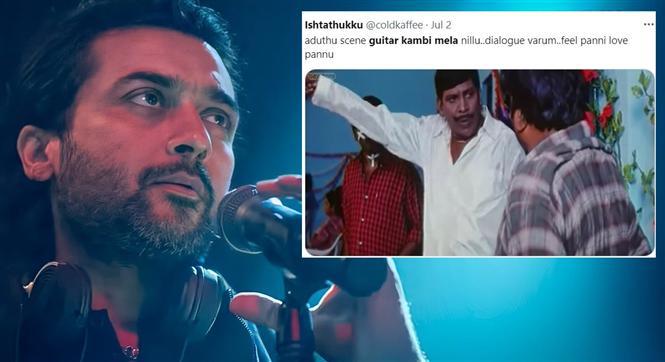 One of Suriya's highly anticipated releases is Mani Ratnam's Navarasa, which marks the actor's long-awaited reunion with director Gautham Menon. The Netflix movie which is made as a direct OTT release comes with 9 parts denoting 9 emotions, and recently it was revealed that the Suriya, Menon part of the anthology is titled Guitar Kambi Mele Nindru.

The title has not been officially announced but fans of the Suriya, Menon duo have already expressed disappointment over the alleged choice. They have so far responded that for a director who waxes poetic with his Tamil titles, Gautham Menon could have rather gone with the English translation which is 'over the strings'.

They have also come up with some hilarious tweets in the process:

'Guitar kambi mele nindru' sounds like that song KSRavikumar & Kamal haasan sing to each other in Panchathanthiram.