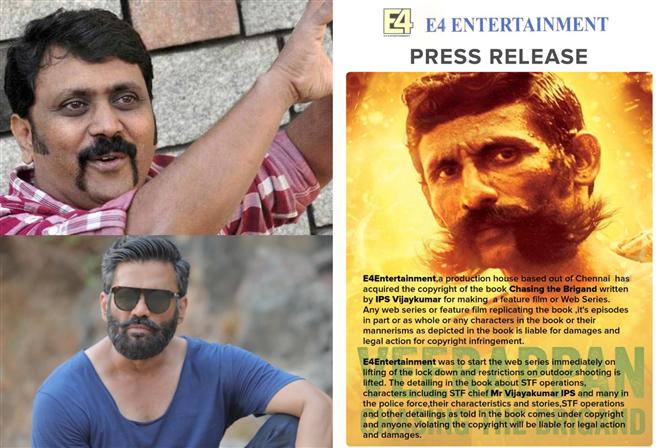 Recently Kannada director AMR Ramesh had revealed in the media that he intends to make a web-series on notorious South Indian dacoit Veerappan, who was known for smuggling sandalwood along with kidnapping and killing. Ramesh had said that this 10 episode series titled Hunger for Killing will feature actor Kishore and most likely Suneil Shetty as a cop and will begin shooting in August with Vijai Shankar for music and Vijay Milton, Vaidy S at the camera.

However Tamil production house E4E Entertainment known for producing Aditya Varma has said that they all rights to make a film/ web-series about Veerappan lies with them. E4E Entertainment holds the copyright to the book Chasing the Brigand by IPS Vijaykumar, the policeman instrumental in the capture and killing of Veerappan.

Vijaykumar's book famously narrates how the then Chief Minister J. Jayalalitha employed him, who had experience serving in both SPG and SSG to head Cocoon, an undercover operation for capturing Veerappan. "Many in the police force, their characteristics and stories STF operations and other detailings as told in the book comes under copyright and anyone violating the copyright will be liable for legal actions and damages" , said the statement from E4E.