Kaaval Thurai Ungal Nanban, which stars Suresh Ravi in the lead is all set for release on March 20, 2020. Producer Dhananjayan's Creative Entertainment has acquired the distribution rights of the film, which is directed by RDM.

The trailer of the film was released today. Going by the trailer, the film is expected to a hard-hitting drama involving a common man and the police department. 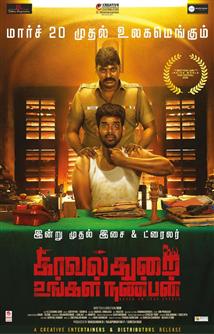