Baaram Review - A gritty attempt that proves its worth with brilliance written all over it! 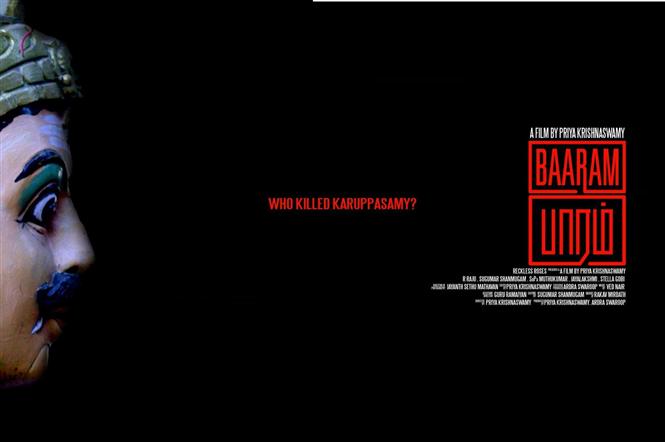 A gritty attempt that proves its worth with brilliance written all over it!

When you watch a 90 minute film that is touted to be made by a debut director, the last thing that you would expect is to witness a thought-provoking, extremely intense, genuinely well made masterpiece, that would make you ponder hours after the screening. This is exactly the impact that director Priya Krishnaswamy’s Baaram would leave on movie buffs and cinema fans! What makes Baaram such a special film that deserves a watch?

Presented to us by director Vetri Maaran’s Grassroot Film Company, Baaram is about Karuppasamy, an old night watchman and his life after he breaks his hip. He lives with his three nephews of which Veera is his favourite and also has a sister alongside him in a small house. One fine morning while returning from home, Karuppasamy gets hit by a vehicle and breaks his hip. A surgery can save his back and life but his son, a man who lives in a village nearby decides to take him home to heal him with a traditional method. What happens after this forms for the rest of the story.

Though Baaram’s line might seem like one that cannot be made into an out and out engaging film, director Priya makes sure her scenes, characters, frames and dialogues keep audiences hooked. To add to this, Baaram has a very beautiful semi-investigative side to it that sees a mysterious set of deaths and their causes. These portions would leave you awestruck and it is purely harsh reality depicted on the silver screen. It would make audiences question the methods adopted by smaller villages of our country and whether these punishable crimes meet what they deserve or not is something that the police and the government are left to decide for.

The casting of Baaram is so natural and you cannot find a single known face in the team. This is not just a bold move but also a very progressive one. It leaves us with no preconceptions about any of these actors and what they are capable of. Every character is so lively and well portrayed. Special mentions include R.Raju, Sugumar Shanmugam, Muthukumar and Stella Gobi. Full marks to the casting equation.

The beauty of Baaram lies in the fact that the team has not tried to make you feel sympathetic for the events that happen in this village. It is more like a report that is so realistically captured that you get the cinema feels without it being cinematic at all. Something very rare indeed! Mention worthy scenes include the scenes between Karuppasamy and Veera (one of the nephews who is also a social activist) and of course the menacing son and his conversations with the wife and his father (Karuppaswamy). Cruel is an understatement to describe the events that unfold in this village and the worst part is that these people who know of such events, think that it is perfectly fine and the right thing to do.

As for the Technicalities, Baaram may not have the bombastic budgets that big commercial films have. But it has exactly what is required for a 90 minute, genuinely brilliant film that has won a National Award. Be it the cinematography by Jayant Madhav or the editing by director Priya herself, the frames and cuts are of top quality. In fact, none of the shots seem filmy and the entire look and feel of Baaram is live reality. Music by Ved Nair supports in places too.

On the whole, Baaram by director Priya Krishnaswamy is that film you get once in many years which deserves to be celebrated for its purity and unadulterated treatment, clubbed with a philosophical layer that questions the ways of our society. Are we still in a very dark time and era where old people cannot feel safe? These questions will arise in every watcher’s mind and the aptly titled Baaram will have a lasting effect on everyone! Go for it and experience real cinema!

Ecstacy for cinema lovers! Baaram is a must watch!