Vijay's Bigil is now the most liked Indian trailer on Youtube 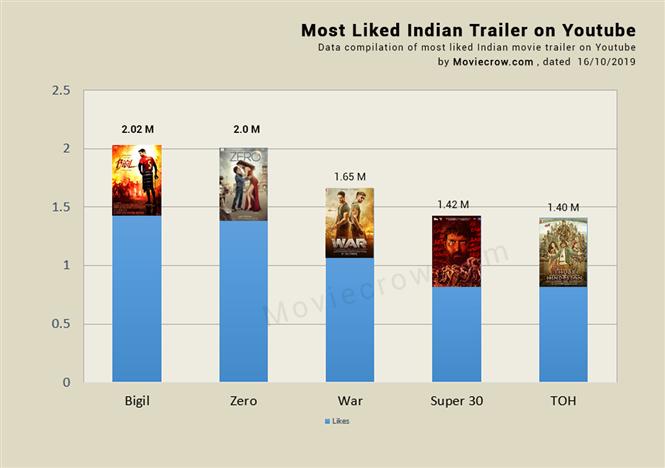 Vijay starrer Bigil is one of the most awaited films in Kollywood this year which is hitting the screens for Diwali. The hugely anticipated trailer was unveiled on October 12 and has been smashing records on Youtube ever since its release. The trailer which has been trending at the top position has registered 2,020,521 likes till now and has become the most liked trailer on Youtube in India surpassing the record of Shahrukh Khan's Zero trailer (2,006,880 likes). The amount of fan-craze surrounding the lead star and the film keeps increasing day by day and, this huge viewership stands testament to that.

Vijay's Bigil Trailer is the fastest Indian trailer to have achieved this feat in just 4 days. It is a remarkable feat for a Kollywood film when compared to Bollywood films which cater to a wider range of audience across the country.

The trailer has received mostly positive response from fans and audience. The trailer was praised  by Kollywood and Bollywood celebrities as well.  The sports drama directed by Atlee is bankrolled by AGS Entertainment. The film has completed its censor formalities and has been awarded 'U/A'. Also starring Nayanthara, Jackie Shroff, Vivek, Kathir, Indhuja Ravichandran, the film has music by A.R. Rahman.