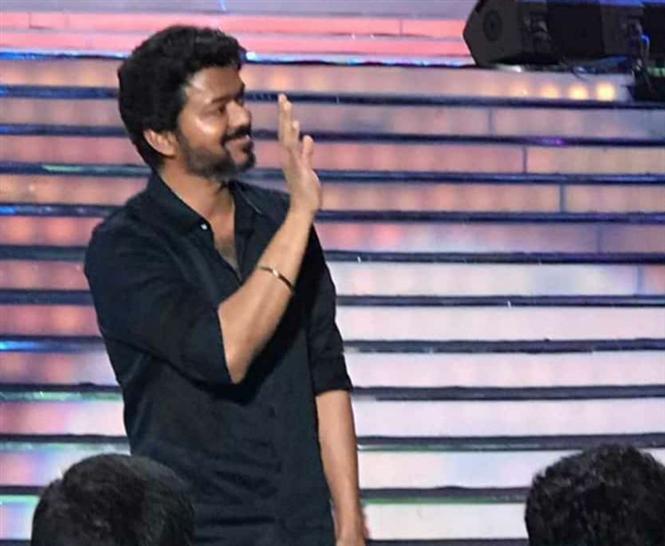 The long wait is finally over as the much prolonged phase of Thalapathy Vijay rendering speech has arrived. He started off his speech by rendering few lines of “Verithanam” followed by signature lines saying “En Nenjil Kudiyirukkum”... His complete speech was blended with fun and punches saying, “ Suda suda aavi parakkum, adhu idli aanalum seri, Atlee aanalum seri”. He was seen holding a piece of paper that had names of everyone working in the project so that he doesn’t miss anyone.

He mentioned saying that life is like a football game, where we try to strike a goal and there are many to hamper it. Much disappointingly, there are many beside us going for same side goals. So we need to tackle all such hurdles and get our goals fulfilled in life.”

He appreciated Nayanthara saying that she is a part of women based film after being a winner in life as well, which is a source of inspiration for many. Getting on to speak about crooning Verithanam song, he said, “Initially, I just recorded few lines of the song and sent it to AR Rahman sir and he wasn’t there in town during that time. I was little taken back and thought my voice is rejected. However, I was surprised to hear It fromAtlee saying that ARR wanted me to come for recording. If not for the motivation of Altee, this would have not been possible.”

There were lots of strong statements from the actor that included Subashri’s death as well. “It’s disheartening to see that the main culprits are avoided and Lorry driver is being framed. It would be better if you guys can trend a hashtag for this.”

Later, he said that one can play his own game in politics but it’s not advisable to bring politics into games.  He also pointed out on negative criticisms that often trend on social media saying, “They are okay if it’s for fun but shouldn’t cross the limit.” He finally made a loud call to the haters saying that they can tear down his posters and banners, but don’t disturb his fans.”

Vijay also didn’t miss to bring the humorous touch on Nesamani memes that were recently trending and he said that during this particular scene during shoot, Suriya controlled the laughter, but he was literally out of control.