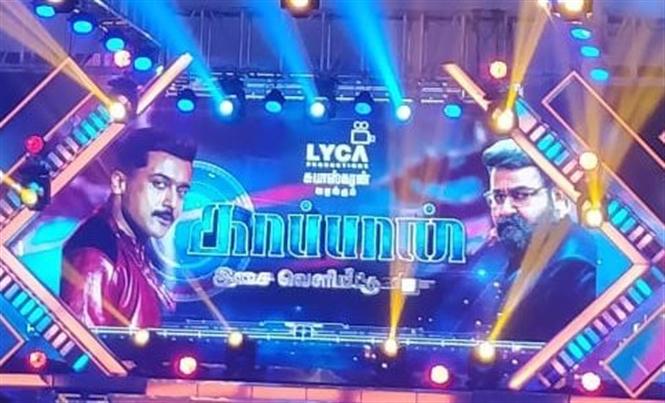 The audio launch of Suriya-Mohanlal starrer Kaappaan has been one of the much highly anticipated film events of this season for there haven’t been any such grander occasions in the recent times. In addition, with Superstar Rajinikanth gracing over the occasion as special guest, it has turned to be a double bonanza. While Sun Pictures covering the event exclusively, Lyca Productions has executed the event perfectly, where there hasn’t been any images leaked from the spot.

Here are some of the major excerpts from the occasion…

“It’s really nice to see Superstar Rajinikanth being generous enough to attend this event and encourage the team of young and upcoming stars.

“Sayyeshaa is an underrated actress for she has so much of potential to perform the challenging roles easily. She’s a brilliant dancer indeed and has a great future ahead.

Mohanlal sir is a spontaneous actor and he performs in such a way that there aren’t any cameras around him at shooting spot. He appears as Prime Minister of the country and I am sure no other actor could have done breathed life into this character like him.”

Actress Sayyeshaa thanked the entire team of Kaappaan for giving her an opportunity to be a part of this project. She surprised the crowds by speaking few words in Tamil. Especially, she thanked Arya saying,

“Arya is the most encouraging and supportive husband. Our marriage was more like an arranged and t was Arya who approached my mom directly regarding our wedding.”

“Suriya sir and Jyotika madam are the finest example when it comes to celebrity marriages. Suriya sir is a like an elder brother to me and is a good advisor when it comes to marriages and relationships. His discipline, dedication and hard work are the reasons for such a high stature and success in the film industry. I am so happy to be a part of this film that is whelming with legends.”

“KV Anand owns an exceptional quality and his greatest USP is that he never underestimates the capacity of audience. This is the major reason why he is able to deliver big scale ventures consistently. He has proved his smartness in handling the societal issues, especially when it comes to the political scenario.”

“This is my 9th movie Suriya and we collaborated for the first time in Kaakha Kaakha in 2003. We together have delivered good hits and in 2019, we are happy to team up again for Kaappaan. I got excited when KV Anand narrated me the script of Kaappaan. I earnestly thank Lyca Productions for bankrolling this project and big budgeted ventures continuously.”

“Suriya is my favourite darling on the stage here. In my 40 years of experience, I have never seen such a dedicated and passionate actor. Arya is like my son and I am sorry that I could not attend his wedding unfortunately.”

“Many are saying that Sivakumar sir is still young, but Suriya is getting younger year by year in terms of looks and performances. I hope Kaappaan will be a great mass film for him. When I saw the Kaappaan teaser, I could easily find that it has all the elements of a successful commercial cinema. When it comes to work, KV Anand is a Raatchasan.”

Actor Suriya started off his speech addressing his fans as ‘Anbaana Thambi Thangai’ and continued to add,

“Let us not speak about anything outside ‘Kaappaan’ and not do anything for the sake of publicity. I admire Shankar sir a lot for he is the rare among the rarest directors who is able to attract the Pan-Indian audiences beyond language barriers and succeeds greatly.”

“I have known the potentials of KV Anand from the time of ‘Sivaji’, where he was the cinematographer. Director Shankar used to tell me that KV Anand is perfect in judgment of scripts and he instantly told after hearing the script of Sivaji that it will be a sure-footed winner. I was supposed to work with KV Anand before years and it was actually a superb script. Unfortunately, the film didn’t take off due to some reasons. Mohanlal is the most natural actor in Indian film industry and his presence is a big boon for the film. Arya’s performance in Naan Kadavul is phenomenal and I am still wondering, how he could pull off that Aghori role efficiently.  I have interacted personally with many Aghoris in Himalayas and Arya looked exactly the same as them. Harris Jayaraj is an exceptional music director, who is a mix of Ilayaraja and AR Rahman and my all time favourite is Vaseegara.”