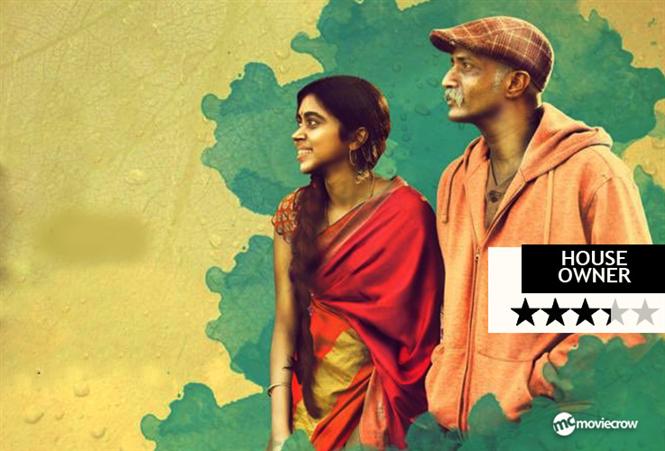 Director Lakshmy Ramakrishnan’s next film is the Kishore and Sriranjini starrer House Owner, which is based on the 2015 Chennai floods. We might have seen a lot of commercial romance films before but the angle of love from which this movie is narrated is something unique. The entire movie talks about the romance between Radha and Vasudevan from their teens to their 60’s and how things have changed over the years. Has this mature romance drama emerged as a worthy watch?

House Owner is no usual romance as most of the film deals with the care shown to each other by the lead actors played by Kishore and Sriranjini in a beautiful manner. Kishore plays Vasudevan, a retired army officer who suffers from Alzheimer’s disease and Sriranjini plays his wife Radha. The two of them reside in their beloved independent house in Ashok Nagar, Chennai. What happens when the floods hit the city and how the couple deals with this forms the rest of the plot. However, right from the title card to the first frame and even the carefully shot flashback scenes, the entire picture has a very fantastically crafted mood and tone. This takes us right into the film and we begin to empathise with the characters.

The movie’s narration pattern is something interesting because we see the screenplay moving back and forth between the present and the flashback portions. Actors Pasanga Kishore and Lovelyn play the younger versions of Vasudevan and Radha and they have done a good job as well. There are very minimal characters in the movie and there is complete focus on the relationship between the two leads in every sequence portrayed. For instance, every scene shown to us in the flashback sees a scenario in the present. Be it the carrom board sequence, the swim in the pond or even a simple dialogue delivered by Vasu to Radha from his younger days, we have a reverse scenario in the present day where Radha takes complete care of her husband whom she loves. This aspect is the USP and the beauty of the picture and has definitely worked out well.

The idea of sticking so true to the plot would come across as super genuine for those who love art films. But for those who expect masala, action or even any typical commercial aspect, this could not be your entertainer. The flashback does have a tinge of cinematic romance in the form of the rituals carried out during the marriage followed by a song, but that is all. You will have to be stuck inside Vasu and Radha’s residence just as they are due to the floods. At some points one might wonder why the couple has to stay in their sinking house when they have a chance to leave for some place safer, but that is exactly what Vasudevan wants and you feel sad for Radha as she has to struggle to make him realise what is going on. He truly loves his house and will not leave it no matter what.

Technically, House Owner has cinematography in its flashback portions to brag about. Such naturistic locations and fabulous frames give us a really fresh feeling in these flashback scenes and kudos to the cinematographer Krishna Sekhar TS. In contrast to this, the dim mood has been set up inside the Ashok Nagar residence of present day Radha and Vasudevan. This just provides the right mood shift which is the major play throughout the film. Music by Ghibran is the backbone and soul and the background score is a delight. Special mention to the nostalgic love BGM and the score that plays in when the snake is introduced into the house, due to the floods.

If you are an audience who expects a gripping ride throughout, you may not be completely engaged as there is adequate time taken by director Lakshmy to get to the proceedings. The conflicts are simple, we have a man suffering from Alzheimer’s and his wife who struggles to take care of him but truly loves him ever since her early teens. Do they escape from a flooding household? Sounds quite simple but a lot of finesse and hardwork has gone in to provide a genuinely depth filled product. The best part of the film for one and all would be the pre-climax and climax scenes that consist of 15-20 minutes of havoc when the flood escalates. The art director must be appreciated for his work within this one house. Along with the director, the art team has made the floods and the desperation of these two characters look so natural and not very staged.

Overall, Lakshmy Ramakrishnan keeps it true to the genre and provides a hard hitting calamity based romance film in the form of House Owner. A few glitches here and there like the Brahmin slang not perfectly delivered by certain characters or the slow paced sequences in the first half that might be a concern for audiences expecting more fizz. Nevertheless, the experience is surely something that is genuinely engrossing and the entire team consisting of the cast and crew deserve credit for churning out ‘House Owner’ with no compromise. A mature tale of romance and care between Radha and Vasudevan troubled by Vasudevan’s forgetfulness and the deadly calamity, flood.

House Owner is a mature tale of romance with an engrossing finish, well supported by a superbly shot flashback! 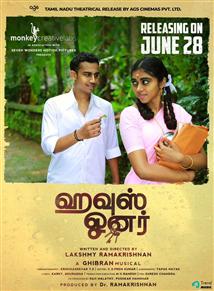