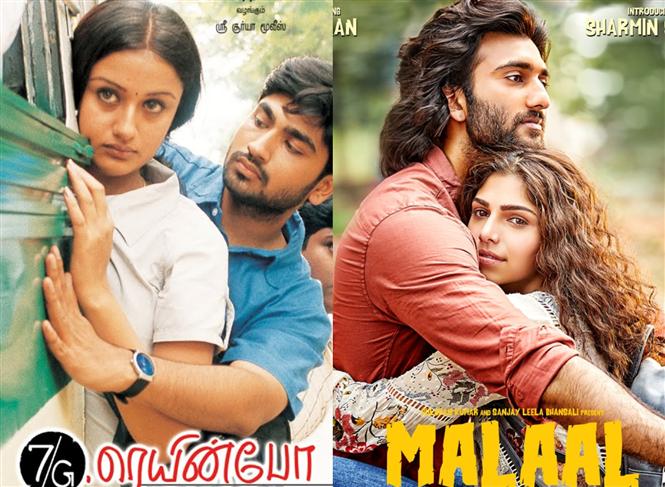 Acclaimed Bollywood director Sanjay Leela Bhansali has launched his niece Sharmin Segal through his production venture Malal, the trailer of which was unveiled recently. Totued to be a remake of Selvaraghavan's 7G Rainbow Colony, Malal also marks the debut of Mizaan Jafferi, son of famous Hindi TV & film personality, dancer Javed Jafferi.
Earlier reports about the film suggest that Marathi director Mangesh Hadawale who has helmed Malal has 'rewritten the script to make it work in Hindi for Bollywood audiences.' However, that did not stop the Tamil audience from expressing their disappointment on Twitter to whom 7G Rainbow Colony is synonymous with dark, soulful and real images. (As opposed to the lively vibe one gets from Malal Trailer).

#Malaal #MalaalTrailer another remake from Bollywood.. This time they want to spoil the Tamil cult Classic #7GRainbowColony 🙏🙏🙏😴

Please watch the original instead of this shitty bollywood-ized remake.

It is worth mentioning here that while the brilliantly made 7G Rainbow Colony which dealt with sensitive affairs of the quintessential middle class and taboos like pre-marital sex (as early as 2004), it also reflected the problematic actions of a curios young adult like stalking and not adhering to consent.
Which is why it didn't come as a surprise when Selvaraghavan who was recently questioned about what he thinks of remaking the film in times of MeToo, said, "..I will definitely change the script. I won't make another 7G Rainbow Colony. We have to be socially responsible also.."