A Dog's Way Home Review - A big treat for those who love paws! 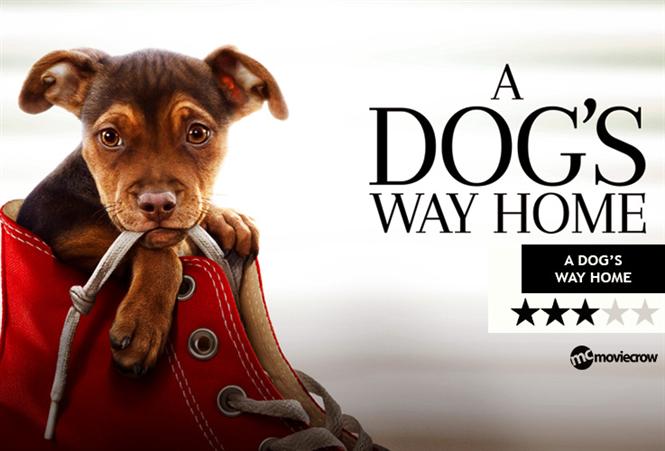 A Dog's Way Home Review - A big treat for those who love paws!

How often have we seen a movie that has a real dog for its protagonist with a voice provided by a human being? Rare is the word and this is where A Dog’s Way Home differs from other animal films. It is particularly unique to watch Bella the Pitbull have a voice by Bryce Dallas Howard and no, this does not strip the film off its natural dog sentiment. What has worked for the picture and what has not? Read the below paragraphs to know more.

A Dog’s Way Home as the title suggests is about Bella’s mission to get back to Lucas her owner played by Jonah Hauer-King. But this is not all of it as we have a back story of how Bella lands herself in Lucas’ house that consists of his mother undergoing depression and himself, a young lad who goes to work. Their bond is as special as any dog and owner’s bond and this has been established pretty well in the first quarter.

We also have a genuine conflict as to why Bella cannot stay with her family in Colorado and from there on, the pangs of separation between an owner and his dog take the centre stage. The beauty of the picture is the numerous characters Bella meets on her struggle to get back home. She is moved to New Mexico and even before Lucas gets back to collect her, she escapes from there blindly in search of him into the wild. This particular juncture in the film suggests that an animal is an animal though it has the voice of a human and the innocence of the being touches us right at the heart.

Some special characters include Lucas’ mom and her bond with the dog, the ‘Big Kitten’ (Cougar), the saviour Gavin and the ageing homeless person named Axel. However, the stand out relationship is between the ‘Big Kitten’ and Bella. Big Kitten is nothing but a cougar or a panther like animal and the bonding between these two animals is the USP of this film. Bella’s voice establishes that the ‘Big Cat’ needs her because she lost her mother cat, just like she did when she was a child. The innocence of these dialogues are so natural and might even bring tears to those who love animals a lot. Kudos to the director Charles Martin Smith for weaving out this amazing herbivore-carnivore relationship and how their love is eternal no matter what.

Though the film does not largely depend on the technicalities, it is easy to say that we have neat work from most departments. Music in specific by Mychael Danna is touching and elevates the emotional scenes. Cinematography adds value wherever possible and there is no issue with the edit as the entire film is under a 100 minutes.

What could be a drawback for a few audiences is that the entire film is narrated from Bella’s point of view and at a certain central point in the film, one might get the feeling of being stuck in the jungle. If we had a few more narratives of the owner Lucas’ point of view or even the animal control’s track in search of the lost dog, things could have been a little more interesting and gripping. Also, Lucas’ bond with Bella seemed a tad bit weaker in comparison to Bella’s bond with the ‘Big Cat’. This could both be considered beautiful as well as a drawback for the film and you would know just why we say this if you watch the climax. Maybe a scene where Lucas is desperately in search of his lost dog could have done the trick. However, the soul of ‘A Dog’s Way Home’ is definitely beautiful and the paws sure shall bring about some happy emotional moments and tears.

Overall, A Dog’s Way Home is Bella’s journey back to her owner Lucas’ home and small commands like ‘go Home’, “tiny piece of cheese’, ‘sit’, ‘no barks’, etc will definitely be very relatable to dog owners and lovers. If you have or had a dog and love him/her this is definitely your film to watch. Even otherwise, kids and the general family crowd who are on the lookout for a feel-good animal based film can definitely give this movie a shot! It is easy to say that nobody would be disappointed at the end of the flick thanks to the natural relationships that dogs establish with us!

Bottomline: An easy win among most audiences but a must watch for the dog lovers!