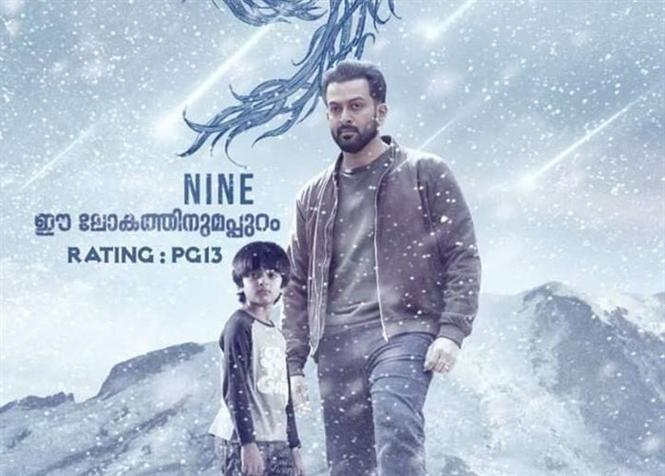 Nine directed by Jenuse Mohammed is probably the messiest of sci-fis I have seen in a while. The film starts brilliantly.. perfectly setting up a mood and an ambience of a claustrophobic, post apocalyptic situation. We are told there is a deadly comet passing by and the impact of it will be left on earth for nine days. That there will be a total electricity shut down and riots and collapsing all over.

But the film goes bizarrely clueless with every fifteen minutes. What starts as a sci-fi slowly turns into a thriller and later into a horror and winds up as some weird Gregorian catholic philosophical rant! Earlier we are introduced to the plot as the entire world going through a crisis of earth endangering situation. However after a while, it all shrinks down to just Prithviraj's home and family. We don't see the calamity hitting or impacting anywhere else.

Prithviraj as Albert (named after you know who) is at his best as always. His performance adsorbs you right from the very beginning. Mamta plays his wife who comes as a vignetted flashes from the past to console and confront him then and there. Wamiqa Gabbi plays the witch who demonizes the film and holds the big twist that's revealed at the end. Her performance is awfully monotonous in a story that's already hay-wreck.

The final reveal that answers for all the mystery and puzzles that the film kept riddling on us is way too disappointing given the pace and all the time in the world this film took in narration. Yes! There is a technical excellence shining all over the film. Abhinandan Ramanujam's cinematography is stunning. The mood it brings to the scenes is brilliant. But all goes in vain as the story constantly wavers in ambiguity.

The ambitiously done, Jenuse Mohammed directorial Nine can be appreciated as an attempt but fails big time to deliver even a barely watchable experience. 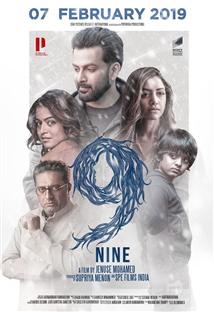