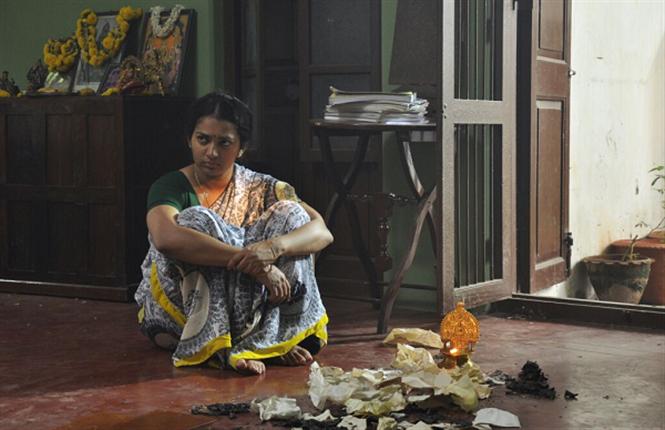 I got to watch ‘Sivaranjaniyum, Innum Sila Pengalum’ in IFFK’18. And I was surprised and happy with the fact that Vasanth has finally nailed his long overdue shift to parallel cinema. He has adapted three shortstories of veteran Tamil writers.. Ashokamitran, Adhavan and Jeyamohan. There is no music or background score. Yet, he film not just resonated with the varied audience over there but won hearts and moved people in its short segmented approach of three stories.

The film, in a way, is an anthology comprising three stories.. about Saraswathi, Devaki and Sivaranjani played by Kaleeswari Srinivasan, Parvathi and LakshmiPriya Chandramouli respectively. The stories are more or less 15 years apart from each other. One happens in 80s, one at 90s and one in the millennium, around 2007. It explores how woman are patriarched generation after generation either harshly or subtly. It addresses the plight of women so very subtly. There is a brilliant miss-en-scene where Sivaranjani looks at her mobile like she is waiting for a text and yearningly looks at this boy playing in an opposite terrace when marriage plans are happening in her house. We never hear about this again. Yet, we get that she has been in love and the guy hasn’t accepted, stood up for her or something. This sense of realism Vasanth brings in is all that the film is about.

The first chapter, set in 80’s, is about Saraswathi, a docile wife to a hugely conservative, male chauvinistic husband played by Karunakaran. The film revolves around what happens post one night when Saraswathi warns him not to hit on her anymore. From then on, Vasanth captures the silent drama that prevails in the household. The husband stops talking to the wife just because of the mere standing up she did for herself. Kaleeswari’s performance comes powerful for the otherwise submissive, less-talked characterisation. Over a period of 30-35 minutes, we see an extensive stretch of how an cold air of refusal and pleading is breathing around the house until at one moment, when Saraswathi chooses to be who she wants to be.

And then, we are opened to a new story. It is set in an urban 90s platform. It is about Devaki, played by Parvathi. She represents the spectrum of increase in working women over the period of 90s. Her husband is supportive of her unlike the character we see in the earlier chapter. He even doesn’t mind letting her drive and sitting at the back. Her in-laws doesn’t mind her going to a job. It all goes well till the family comes to know that Devaki is writing a diary. A diary!!! It comes as a thunder of shock to the family. They demand her husband to check out what she writes. He refuses to do so claiming that its her personal but finally agrees to ask her. When Devaki finds it absurd and says NO.. he gets triggered and reads it himself.

This, according to me, is the most powerful episode of the film. For, it being told from the point of view of a young male kid (who may end up like these men someday). The observations made by each characters in the family  are brilliantly etched out through dialogues. My favourite character is that of Devaki’s sister-in-law who constantly complains about her stand-offish attitude in a very housewifey mode and yet refrains from taking any charge citing ‘Am just saying’! I can’t think of a better option than Parvathy to play Devaki. Her inborn persona that has a sort of boldness and audacity which she brings in to the role without being rebellious or melodramatic tells us so much about the character.

The last story, is that of Sivaranjani, an active yesteryear athlete whose dream to play for her college and state is shelved over dust after her marriage and following pregnancy. From then on, she becomes this yet another housewife who runs over the errands of her husband, her daughter and her mother-in-law. Vasanth, for half the screentime of this chapter shows us the tiringly repetitive day-to-night activities of Sivaranjani. The contrast he draws between an once energetic sportsgirl to this ‘done for the day’ woman we see when she sits at the sofa after she sends off her husband to office and daughter to school van hits you right on the spot.

The story comes a full circle when she takes a day off from her household chorus to visit her college in order to get back a cup she won years ago. It has gone missing. The disturbed Sivaranjani returns back to her world. But in a weirdly practical situation, she wakes up her inner athlete again when her daughter who just boarded the school van has forgotten her lunch box. She runs.. with all the sweat and fire she’s been hiding off and reaches her! This ending, comes across as a bit, clichéd yet Vasanth just wants you to view them as these women who are in a situation doing what they do because they choose to do so.

The visual language of the film is stunning at many places. There are certain repeating motifs. Like, all three women climbing up to take something out of a shelf. To one, it is an utensil.. To one, it is a toy that her nephew asks for.. And to one, it is her cup, a dream! And there are shots that deliver strong statements as well. Like, the powerful image of Saraswathi sitting in a wall after getting to know that her husband has abandoned her, where you can see a fire smoking factory behind. Or, that of a goddessque Devaki watching the flames as she herself sets her diary on fire! So is the image of tired Sivaranjani sitting amidst cups and medals.

Whenever, I think of Vasanth, I get reminded of this line from his own film, ‘Rhythm’.. “Romba nalla paiyanpa nee! Unakku innum konjam nalladhu nadandhrukkalaam!”. Vasanth, is probably, the last of surviving storytellers we have from the 80s era. The blend he has is unique. It has the dramatisation of KB and the flavouresque characterisations of ManiRatnam. There have been hell lot of ups and downs in his career. But with this film, Vasanth rediscovers himself and sets a solid comeback!