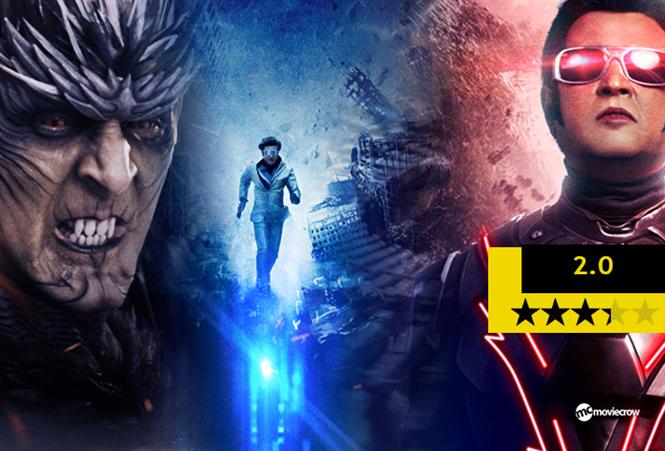 Director Shankar has taken up a premise mounted on questionable science for his much-anticipated 2Point0. The story takes a dismal outlook of humans and our over-reliance on cell phones and technology, and how that is causing the extinction of birds and animals.

If you think Rajini (Vaseegaran) and his robots will be fighting for the noble cause of preserving birds, you are mistaken. It is the story’s antagonist, Akshay Kumar (Pakshi Rajan), who fights for nature’s cause by adopting a radical approach similar to that of “Indian thaatha”. Ironically, Akshay Kumar is the villain here for fighting a just cause and the hero is actually fighting to protect the technology-obsessed humans who are portrayed as causing the extinction of animals. There lies the dichotomy of conflicting purposes and creates a misalignment in our minds as to who should we really root for.

2Point0 is a product of Shankar’s grandeur vision. He has lived and envisioned to its minutest details and painstakingly presented this to the audience after 3 years of making. Kudos to Shankar’s unwavering dedication, hard work and focus to see this through successfully. In this regard, Shankar’s effort should be encouraged wholeheartedly just for the intent to raise the bar for Indian cinema.

2.0 is filled with loads of digitally created scenes and action sequences with a sliver of human narrative unfolding through Akshay Kumar’s flashback sequence. Otherwise, Rajini and Akshay Kumar pound away at each other most of the time, without a clear understanding from a viewer’s perspective as to what it takes to really kill these entities.

Despite Shankar’s effort to provide depth and credence to the plot, the story stands on hypothesis and unproven science narrated more like a fact. For example, there are long scenes to explain aura, dire effects of cell phone waves, fifth force, etc.

2.0’s better moments are whenever Shankar recalls the best scenes and background scores borrowed from the first part. The second part has fewer original ideas compared to the first part. Towards the last 30 minutes, Shankar finds his natural form and infuses energy and some "mass" moments into the climax. The audience erupts when Chitti 2.0 comes onboard and toward the end.

When in doubt, Shankar throws yet another ingredient into the mix – Kutti, the microbot. It is a perfect setup for a sequel 3.0. However, with this version of microbot, Rajini has become shorter, chubbier, fairer, funnier and squeakier. Kutti looks so different from Rajni that the next sequel could potentially be made even without Rajini in it.

Young Akshay Kumar is made to look old and the make-up is so detailed that he is unidentifiable as the Birdman. Interestingly, older Rajini is made to look young and smooth with the generous aid of technology. The underlying character and acting of these mega heroes are lost behind layers of computer graphics and prosthetic make-ups. If the casting had been interchanged minus the make-ups, probably it would have brought out the human factor and real actors in Rajini and Akshay more. Amy Jackson is conveniently cast as a robot and her limited expressions lend itself very well to this role.

AR Rahman scores whenever he borrows the BGM from the first edition. "Endhira logathu sundhariye" in the final title card strikes the right note with the slower paced floss dance. Nirav Shah’s camera work has understood Shankar’s vision and worked in tandem with the graphics team to make this possible. Editor Anthony keeps the editing tight and helps in masking some digital shortcomings.

2.0 is without question an important film of the year. 2Point0 will satisfy indiscriminate devoted fans of Rajini and Shankar. It will also impress the younger audience who may appreciate the video-gaming style action sequences. The adult audience looking for depth and logic will find it exhausting from hectic action sequences devoid of human emotions and unrealized characters.