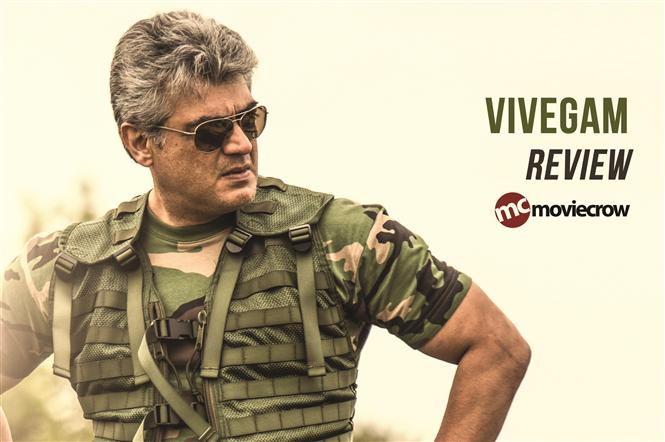 Ajith is working with director Siva after Veeram, Vedhalam and now Vivegam. Will the “V” sentiment work again? Yes and No.

Director Siva and Ajith should be commended for taking an international espionage thriller without making usual commercial compromises in terms of forcing relief comedy and song sequences. Siva’s strong conviction to stay true to the script and not deviating away should be applauded.

Ajith plays the role of an international agent set in this out-and-out action flick. Vivegam is a dedication to Ajith’s grit, determination and hard-work in real-life. Ajith’s ferociously fights against hundreds, if not thousands, of international enemies part of mafia, cartels, secret societies, street fighters, gangsters, mobs, underworld kingpins and of course the betrayers in his own secret service department.

Ajith Kumar as Ajay Kumar (AK) literally lives up to the saying “It's not the size of the dog in the fight, it's the size of the fight in the dog”. Ajith gets beaten down and betrayed by his trusted colleagues, but yet he keeps bouncing back because of the commitment he gives to his wife Yazhini, played by Kajal Agarwal. This is probably the fittest Ajith as he flexes his muscles wearing his tight Ts.

Vivek Oberoi is pitted against Ajith as an equal. He acts as an intelligent villain who is always thinking one step ahead of Ajith. In the way the character is written, Vivek Oberoi is a formidable conniving villain. However due to the writing and execution, Vivek doesn’t come across as menacing as the director must have envisioned on paper. Vivek Oberoi will get a lot of claps since a number of punch dialogues about Ajith’s invincibility is delivered through his dubbed voice.

Director tries to showcase all his sentimental elements through Kajal Aggarwal's character as an understanding wife caught between fear and pride. Kajal has tried her best to do justice. Akshara Haasan as Natasha plays a short yet impactful role of a hacker. The scenes leading up to finding Akshara is probably the best in the entire movie. Karunakaran has a brief relief as translator. Rest of the countless actors occupying screen space are merely cardboard characters. They do not leave much of an impression.

Music and Technicalities - Assault on your Senses

Anirudh has worked hard in foreground score. The director's rage is amplified by Anirudh’s loud death metal rock assaulting your auditory senses. Vetri’s grainy cinematography further puts strain on your visual senses with extreme close-ups, fast panning and zooming. It is further accentuated by Anthony Reuben’s blindingly fast editing stitching together more than 10,000 shots within the run time of 143 minutes.

Apart from a handful of familiar faces in the movie, rest of the casts are foreign. Every single outdoor portion in this movie is shot entirely in Bulgaria, Slovenia, Serbia and other eastern bloc countries. The motive and purpose of Ajith’s rage is not sufficiently established. The hacking concepts are incredulous and over-the-top. Ajith’s single-handed fight against gun-wielding army of villains defies logic. The movie also falls short of emotional & sentimental connect, which are usually the strong suite of director Siva. There are multiple monologues, punch dialogues and tangential one-liners. There is not much in terms of dialogues with more than 2/3rd of the run-time filled with action sequences. Any normal interaction between two characters are mostly double-layered with dual dubbing and accented for the benefit of Tamil audience. As a result, the movie lacks engagement due to alienation of audience.

If you are an action buff or an Ajith fan, Vivegam will be watchable. If you are neither one of them, you may wonder if the director is unleashing his rage against your senses. You have earned the badge to claim yourself to be a “Surviva”.