Vazhakku Enn was removed from all screens after completing 75 days this week. Despite all the unanimous appreciation, it is sad that the movie can be termed only as an above average grosser at the Box Office. Let's see where things went wrong and what lessons can be learned for future,

Balaji Shakthivel took his own time (almost 3 years) to chisel this movie with utmost care. But, he did not have the patience nor did he deem as important to wait for the right time to release the movie. The movie released a week before Kalakalappu. A perfect antidote for a sensitive hard-hitting movie is a meaningless slapstick comedy. Kalakalappu did just that with it's high entertainment quotient (comedy+glamour) totally overpowering Vazhakku-enn. If Vazhakku Enn had focused on the right release strategy by negotiating with UTV, they would have had better luck at the box office.

Lingusamy and Balaji Shakthivel relied too much on tradional media and the director even prostrated in front of media at press conference thanking them for their support. Media returned the favour by giving the highest rating they could possibly give. However, none of these over-whelming support from traditional media could make any difference to the Box Office outcome since the Tamil magazine reading population segment is marginalized when it comes to watching movies.

Vazhakku Enn proved that traditional publishing media are now de-fanged and their opinions have become more like a post-mortem report due to huge delays in publishing the movie reviews.

3. Ignore Social Media at your own Peril

Most youngsters among the target movie-going segment under the age of 25, spend more time on social media sites, youtube and mobile devices than flipping TV channels or reading print magazines as proven by many scientific studies. Despite all the positive word of mouth, Vazhakku Enn failed to go viral since social media marketing was totally ignored.

Lingusamy and Balaji Shakthivel's idea of promotion was giving non-stop interviews in TVs praising their own movie. It is cultural to note that Tamil people don't take self-appreciation too seriously. Also, other directors took an aggressive approach to promotions by blaming the people for Vazhakku Enn's under-performance which further alienated this movie from general public.

It is unfortunate that Tamil audience are still not ready to accept a movie without popular songs. Commercially picturized and composed songs were the key reasons for "Kadhal" reaching out to the masses a decade ago. Balaji Shakthivel bold attempt to do away without relying on catchy songs cost him dearly this time. Since there were no popular songs to be played regularly on FM radios and TVs, yet another segment of the population could not be reached out.

5.  Movie Makers should be all-rounders

Gone are the days when success of the movies can be relied purely based on its content and hero's mass appeal. The movie makers these days need to be all-rounders. Apart from making a great movie, the film makers also need to be a keen business man, meticulous planner, good marketer, creative collaborator, flexible negotiator and above all a common-man in sync with current trends.

Vazakku Enn 18/9 was not strong enough to fight against the strong market forces. There is no doubt that Vazhakku Enn is still Tamil's Industry's best bet for 2012's National Awards. Hope the national recognition make up for the shortage in box office collections. 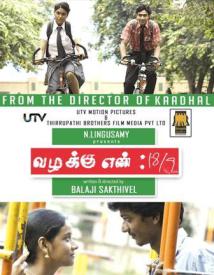