This year has been pretty fruitful for Tamil Cinema, as there have been nearly half a dozen quality releases within first 50 days. At the same time, with so many good movies releasing every other week, many of them fail to capitalize on their full potential and their theatrical run is often cut short. Jayam Ravi's Miruthan and Vijay Sethupathi's Sethupathi were the notable movies that had hit the screens last weekend. Check out the box office ranking of Tamil movies in Chennai during last weekend.

Jayam Ravi's Miruthan, directed by Shakti Rajan, took a good opening, thanks to the tagline of Tamil Cinema's first zombie thriller. It would be interesting to see how the movie sustains at the box office this week, as the reviews have been mixed.

Director Arun Kumar's Sethupathi starring Vijay Sethupathi was the unanimous choice of moviegoers last weekend. With positive buzz for this entertainer flooding in, the movie is expected to continue doing brisk business at the box office and is most likely to become a hit.

The quirky Jil Jung Juk lost majority of screens to new releases and sadly, the mad rush at the box office has made this promising movie get lost in the crowd.

Madhavan's Irudhi Suttru and Vetrimaaran's Visaranai, which have been declared as hits already, held on to sizeable number of screens in the multiplexes. Vil Ambu, Bangalore Naatkal and Aranmanai 2 were running across a few screens with low occupancy levels. 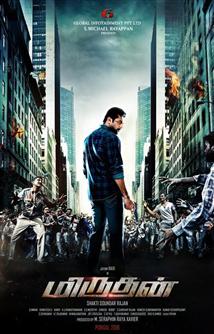