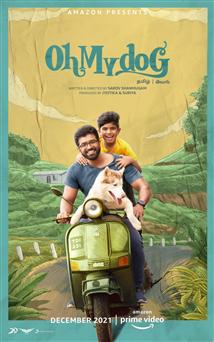 Oh My Dog is happy to stay simple and in a way it works for the film. It is the kids who should be telling if it worked or not. For the adults, it remains a harmless watch and that should be a victory in itself.(more)

Oh My Dog is a feel-good film that is bogged down by an uneven screenplay. What the film gets right is the treatment of pets and its bonding with people.(more)

Oh My Dog is predictable. Right from the first frame, you can guess how the film will unfold next. And there is no doubt about how the film will end. The only surprise we probably get is the degree of clumsiness. After all the contrivance, it is hard not to empathise with Fernando when he screams 'What is this nonsense!' with a puzzled expression. We truly feel ya bruh. We feel you.(more)

Oh My Dog is a sweet film that will best appeal to kids and pet lovers!

one can say that Oh My Dog is a cute, kid-friendly film that will make you smile!(more)

Oh My Dog! doesn't make us say Oh My God, but makes us sit through it with some good moments.(more)

A heartwarming, likeable drama about a boy and his dog

The film draws basic inspiration from movies like 101 Dalmatians, especially when it comes to the character of Fernando being inspired by Cruella De Vil; but it still has elements that are original and rooted in Tamil culture to make it more accessible. It would�ve been nicer if the film chose to have a mongrel or even a local breed of dog instead of a Husky to encourage more people to adopt and raise strays(more)