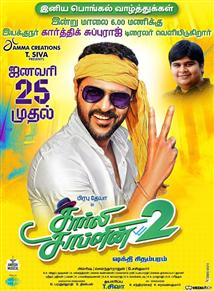 A 90s Style Comedy That Is Occasionally Funny!

Prabhu Deva, Prabu, Vivek Prasanna and Ravi Maria do manage to tickle you a few times but there is hardly any stretch in the film that provides consistent laughter. Funny at times but hardly packs a punch.(more)

Though the movie provides laughs in certain sequences as expected, the logic goes for a toss several times.

What falters is the way a simple issue is treated in a complicated way, making the plot a never ending one. Though the movie provides laughs in certain sequences as expected, the logic goes for a toss several times. The number of songs, which make no impact, too, test the patience.(more)

Takes audiences for granted, and is a pain to sit through!

Charlie Chaplin-2 is a film for audiences who don't care much about the logic, quality or a coherent script. If you are someone who love to watch slapstick comedies and laugh along with the crowd, this is your kind of film! As said earlier, the first half tests our patience with a lot of flaws including poor lip-sync, bad editing and lame jokes. Thankfully the second half is better (in comedy department). (more)

This One Definitely Qualifies For A Releaxed Watch!

An entertaining movie if you crave for an engaging couple of hours by leaving behind the day-to-day stress and workload tautness.(more)

A sequel just for the sake of it

Shakti Chidambarams's hits 'Maha Nadigan', 'Englishcaaran' and 'Charlie Chaplin' along with comedy had a story to tell that connected to the audience. In this sequel he has decided to make do with a wafer-thin storyline, uninspired performances, and sparse humor. Go for this one if you are a PD fan and have minimal expectations(more)

Prabhu Deva is wasted in this incoherent, unnecessary sequel

The film starts with Prabhu Deva bashing up a dozen goons single-handedly and the scene has no relevance to the story. In another scene out of nowhere a glamorous Adah Sharma (supposedly a psychology student) comes out of a flashy red sports car and tells our hero Prabhu Deva that he is handsome and that she loves him. Charlie Chaplin 2 has been long in the making which can be seen in the final product.(more)

When complication leads to fun

Charlie Chaplin 2 sticks to comedy, it is passable. The making is sluggish - sometimes reminding you of a TV serial - but the comedy of errors, especially in the second half, brings about smiles here and then. Prabhu is among the more hilariously-written characters; he's a doctor who is also a foodie. In a tense scene when a cellphone in missing, he hears the call of 'lunch ready' and quickly sneaks out. He'd certainly know the answer to the viral question these days: Sangam mukkyama Sapaadu Mukyama?(more)

Charlie Chaplin 2 is funny in parts but not palatable as a whole!

This movie has a runtime of 2 hours and 7 minutes and also marks the debut of Prabhu Deva as a lyricist ('Ivala Romba' song) and also TV anchor & Bollywood actor Samir Kochhar's debut in Tamil cinema. Reputed actors like Amit Bhargav and Samir Kochhar have not been made use of and their roles add no value to the movie. The constant digs at Prabhu's weight and his character's affinity towards food do not seem to be in great taste.(more)