Neither a taut spy thriller that it ought to have been, nor a good social commentary that it tries to project towards the fag end, Aiyaary is a lost cause all the way. It�s a film that even Manoj Bajpayee with his sincerity cannot save.(more)

Aiyaary is sketchily-written and not compelling. It tests patience even if you are a fan of the genre. It demands way too much endurance than what is left in you after watching Naseeruddin Shah's bizarre monologue.(more)

'Aiyaary' has quite a few lethargic scenes that are long-drawn and don�t do much to further the story or add to the characters. The complexity of the overarching plot allows for some exposition, but the screenplay goes overboard and often loses pace. The film could make a far more intriguing watch with a tighter edit devoid of all the dramatized entries and exits. Those expecting the clever Neeraj Pandey twists will probably be left wanting more. But 'Aiyaary' has measured performances that resound louder than its bombastic score, and they alone make it a worthwhile watch.(more)

Aiyaary's first hour is engaging because it gives us reason to assume that great twists and turns will unfold at any moment. That promise is unfulfilled in the remaining 100 minutes of the film. Pace and bluster cannot compensate for lack of substance. This wannabe James Bond flick is nothing but a blast of hot air.(more)

Had the film been closely edited to make it pacy, it would have sent out the message it intends to. As of now, it remains as lost as the purpose behind some of the film's long drawn chase sequences.(more)

Aiyaary wants to be a daring thriller that calls out smarmy politicians and arms dealers. But it only fires blanks. It begins with a disclaimer that its story line is strictly fictional and that it has the utmost respect for the political class and the military establishment. The film lives up to its word. At the end of all the sound and fury, the purported targets are left unscathed. Only one poor cornered ex-soldier puts a bullet through his throat(more)

Neeraj Pandey Shares An Important Message, Just Hold Your Grip Till The End

Definitely, a must watch for the suckers of this genre. Neeraj Pandey draws some dots in the first half just to join them in the second. Manoj Bajpayee & Sidharth Malhotra deliver exhilarating performances. The movie has an important message to share, just hold your grip till the end.(more)

Aiyaary misses the mark and is a huge letdown

AIYAARY misses the mark and is a huge letdown on the account of its flawed script and the lengthy runtime. At the box office, it will be a disappointing fare.(more)

'Aiyaary', there is no scope for any music because of its plot but the film could have been better paced, all thanks to the under-cooked narrative. Aiyaary is a throw away effort from director Neeraj Pandey, where the only saving grace is Manoj's act.(more) 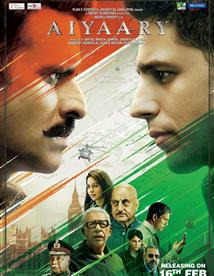