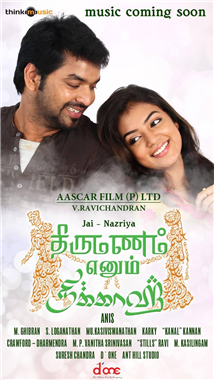 The central theme of the film is narrated convincingly thanks to the lead pair. But their change of mind again in the end with apparently no proper justification or emotional reasoning brings down TEN by a few notches.(more)

Thirumanam Enum Nikkah could have been so much better, with little more effort from the scripting team!

we see a shot of all the actors of the movie in a train, and the shooting equipments in the platform. The shot ends with a glimpse of the platform number 10 aka TEN. Such fine directorial touches from Anees were not evident in the movie. (more)

The director Anees�s intentions to provide a feel good romantic entertainer on the lines of a Sooraj Barajatya or a Bhansali fails as he is let down by a weak script. The screenplay is a mess and presentation is amatuerish, that leaves you bewildered.(more)

Love is beyond the borders of religion, caste and race; all that matters in love is sincerity. And when it is comes to dedicating the rest of your life to someone, how far would one go? There have been a number of portrayals of inter-caste and inter-religion love stories, but it is not often that they throw light on the religious practices perse and show it in the right light. Coming from debutante Aneesh, here is story of love on a different outlook.(more)

Thirumanam Enum Nikkah has a decent story but bad screenplay plays the spoilsport.

The initial friendship soon turns into special liking between them. But we should note that they have fell in love with fake identities and in the process they are getting to know about Muslim traditions. But like in every story, the truth should prevail and once they came to know about their real identities, the couple part ways. What happens next is the crux of the story (more)

Starts off on an interesting note

After a long wait and with Ramzan around the corner, Jai � Nazriya starrer Thirumanam Ennum Nikkah which created a huge buzz for its songs and trailer has finally hit the screens. Vijayaraghava Chari (Jai) is on a trip to Kovai and travels in a fake name Abu Bucker, a ticket facilitated by the local middleman (Mayilsamy). He meets Vishnu Priya (Nazriya Nazim) who also travels in a hidden name Ayesha for a project demo of her Muslim friend. Both belong to orthodox Brahmin families and work as IT professionals. A bad guy�s entry in the journey brings them together and the inevitable happens� romance blooms. (more)

Raghavan and Priya fall in love during a train journey, but both believe that the other is a Muslim and start pretending to be of the same religion.

Thirumanam Enum Nikkah is like the romance dramas in which there will be no story at all if the leads talk to each other in a frank manner and so will have to keep pretending for the plot to go on. It is based on a single construct � two lovers belonging to the same religion (and even the same sect) mistaking the other to be of a different religion and so pretending to be of the same religion. It all starts when Vijayaraghavachari aka Raghavan ( Jai) approaches a tout for a ticket to Coimbatore. He is asked to pretend as Abubacker and on the train, he meets Vishnupriya (Nazriya), who is actually travelling under the name of her colleague Aayisha. He earns her confidence and both think of the other as a Muslim.(more)

Aneesh's Thirumanam Enum Nikkah has a story and script that seem to have been penned in the most amateurish, nay bizarre, style. The film is trying to do something novel but fails. We have Jai's Vijayaraghavan, a devout Hindu Brahmin - sacred ash on his forehead and a holy thread across his chest - trying desperately to get a train ticket in Chennai's Central Station, where a tout offers him one, but under an assumed name. So, Vijayaraghavan becomes Abu Bakr, a Muslim.(more)