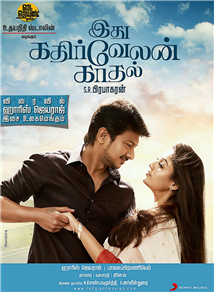 IKK has a fair dose of comedy. But unlike OKOK this is essentially a family drama. The supposedly serious problems in the way of Kadhirvelan easily weed out for him to succeed. While the maker has obviously wanted a light hearted treatment, more than one instance of quite a grim situation turning into fun by either a silly revelation or a dumb act might stick out for a section of the audience. (more)

A rom-com family drama which falls short of realizing its full potential.

Udhayanidhi is given a moment to voice out on ideal parenting but even with an earnest effort from the actor, the scene falls short of its desired result and leaves you wondering if the true potential of the script was realized?(more)

The usual ROMCOM with a dose of family and sentiment

Take of your OKOK glasses and watch this movie, for it's a clean family entertainer and a perfect outing for a Saturday evening. (more)

Ithu Kathirvelan Kadhal is your everyday love story, made special by its simplicity, the well-chosen characters, some good dialogues, commendable performances and excellent music. (more)

he film is made in the template of a regular Tamil film style romcom which means hero and heroine fall in love for no particular reason and everything else falls into place with an emotionally manipulated climax. On the whole, it's impossible to find much love for this film!(more)

Very little ambition and is only mildly interesting.

Kathirvelan falls in love with Pavithra but there are quite a few obstacles that he has to cross before he can marry her... (more)

It begins to play out well into the second half, and that's when the film really perks up, with all sorts of cheerful nonsense like a mimicry artist and the ability to overhear conversations in a house across the street. In the last half-hour, we finally get something close to the romantic comedy we were promised.(more)