Veeram is a treat for Ajith fans

After Billa, Ajith seems to have acquired this all-powerful indestructible image that seems to have struck a chord with the audience, and all his directors seem to be bending over backwards to nurture this image. (more)

A cocktail of mass and action, served Thala style

Veeram has proved it doesn�t have to be! Ajith has demystified the fact that mass does not relate to entire movie presence, but the times you appear should make you stand up and clap! His body language is adorable and the salt n pepper looks makes him look even charmer! (more)

Ajith and Siva dish out a 'heady' commercial package for the actor's fans.

Director Siva and team, have ensured that the movie is not just a showcase of Ajith�s action and heroism but also a good cocktail with healthy comedy and sentiment in good measure. (more)

Right in the opening segment, director Siva lays out his cards. There is a fight between two groups in a college and the new principal, who wants to put an end to this, goes to meet the elder brother of one of the parties involved in the scuffle. And, there, we see that the brother himself is a ruffian, who will feed people before beating them as he wants them to be strong to take the blows. But since this person is also the hero of the film, he is what we could call a genial rowdy, and the scene plays out mostly for laughs. (more)

In a constant effort to churn out a commercially successful product, our filmmakers completely ignore the fact that entertainment is not about hero-worshiping. Veeram is a classic example, which elevates Ajith and leaves the rest of the ensemble cast behind. It's a pity to see talented actors merely reduced to a few scenes while the newcomers hardly have any presence. The film is dedicated to Ajith, who is as charismatic as ever in his role. However, he is unfortunately not complemented by a strong screenplay. (more) 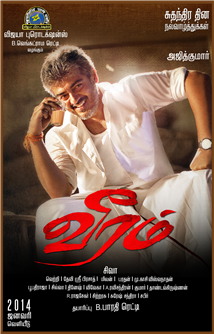