Kaaviya Thalaivan, set in early 20th century, is about the lives of two drama troupe artistes played by Siddharth and Prithviraj and the competition between them. Director Vasanthabalan's most expensive venture till date has managed to arouse tremendous interest among critics and movie aficionados.

The crux of Kaaviya Thalaivan has a number of parallels to that of Aadukalam. Kaaviya Thalaivan deals with range of human emotions -- friendship, love, betrayal, jealousy and ego narrated through the five central characters. The vision of drama troupe in pre-independence era is where Vasanthabalan brings his unique touch. Vasantha Balan known for his brilliant characterization continues to maintain his masterful touch. The initial scene where Siddharth and Prithviraj discuss their diverse point-of-views about what is good acting sows the seeds for rest of the movie.

Vasanthabalan's phenomenal amount of homework and research done in scripting and etching the backdrop is evident in every single frame. Thankfully, Vasanthabalan has also kept himself in check by not getting over-melodramatic as seen in his previous movies. The story and dialogues by Jeyamohan are sharp, efficient and focused.

The story is established through the lives of characters played by Siddharth, Prithviraj, Nasser, Vedhika and Anaika. Nasser as a tough disciplinarian enacting the role of a small scale drama sabha owner fits to the T. Siddharth plays probably his most difficult role till date in a convincing manner. Siddharth has also got the best scenes in the movie where he gets on-screen applause for display of his innate acting talent. Prithviraj has a more complex role where he needs to act out in such a way that Siddharth can walk away with honors of being a better actor than himself. Vedhika looks good, dances well and emotes great. Anaika as mischievous princess does her part well in her limited role. However, the voice dubbing is a bit out of synch at places. Thambi Ramaiah helps in lightening the mood.

AR Rahman's background score is integral to the movie. AR Rahman's background music helps propel the story forward. Even though the songs cannot be categorized as typical chart-busters, they are situational and have been well acclaimed by critics. All the songs gel well with the movie except the dream sequence song in the second half involving Siddharth and Vedhika.

The cinematographer, art director and costume designer transport the viewers to the mid 1900s. Nirav Shah's cinematography is exemplary and helps expand the budget of the movie by maximizing the limited resources available. The consistent style throughout the movie and the warm lightings bring out the right ambience necessary for a period drama. Let us expect the technical team to take home a number of awards.

What could have been better

The script lacks shock and awe impact since Prithviraj's characterization is along predictable lines. Prithviraj has played a number of similar characters in his past movies. Potential interchanging of casting choices of Siddharth and Prithviraj in their respective roles could have possibly brought out more layers and a sense of surprise to the narration. Vasantha Balan's screenplay could have been tighter, especially in the second half. The lead characters' abrupt rise and fall in the second half could have been ironed out and smoothened. That could have avoided some dissipation of focus from core theme of the movie.

The narration of Kaaviya Thalaivan is just taut enough to keep you engaged from start to finish. The movie is watchable for the sincerity of team's vision and convincing re-creation of interesting backdrop and time period. 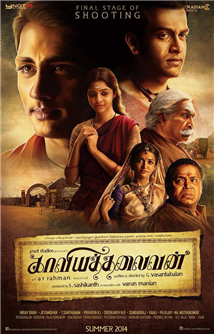