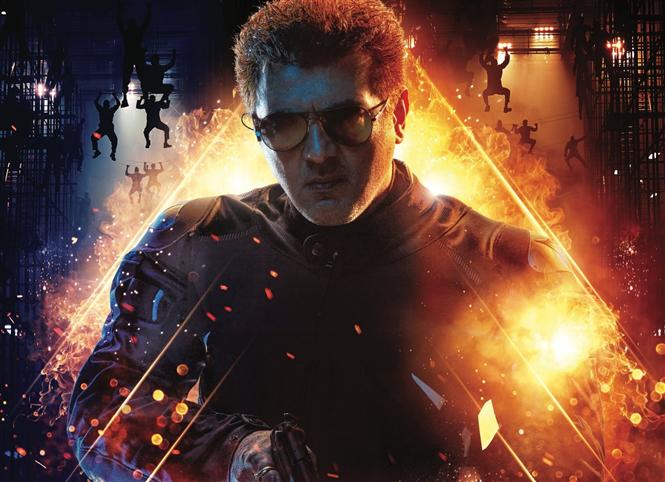 Introduction:  Valimai is an action thriller starring Ajithkumar as a cop. The film is directed by H.Vinoth who took our attention through his sensational films like Sathuranga Vettai and Theeran: Adhigaaram Ondru. The project is bankrolled by Boney Kapoor. And, this is the second outing of the actor-director-producer trio after their successful and sensible Nerkonda Paarvai which came out in 2019.

Karthikeya is the head of the crime world, he leads a bikers gang where they involve in murders, chain snatching and drug peddling. Ajithkumar is the Police Officer who comes to Chennai from Madurai to deal and solve this case. How he cracks and fight it out to save the day forms the remaining story.

H.Vinoth is known for creating a unique world for his film’s baddies. He does the job here, by giving enough depth of how they execute their operations and stuff. They have their own signature and a psychic mentality, just like the villain gang had in Karthi’s Theeran: Adhigaaram Ondru. We get a lot of details at the very beginning about the crime world that this movie deals with, however the format feels like bit of a documentary. Then we get some hero introduction portions in Madurai, the family angle initially does look like a deviation, but it does come together at a point of time with the main storyline. The film starts sparkling thoroughly once the cop lands in Chennai and takes charge of the case. The investigations are quick yet satisfying, with some twists and turns, the pre-interval setting is a superb gripper. Although, the action setting is more of a stuntman’s work, director H.Vinoth deserves accolades for writing the needful situation, in that case, the filmmaker has created convincing purposes for the chases. Because the villains are a bunch of bikers, it easily becomes Ajithkumar’s forte to hit it out of the park. Second half mostly lacks with hardly any interesting setups. Other than the sequence where the baddie escapes from a Police Bus, nothing really attracts or holds. Even the action portions that were engaging till a point failed to click in the final few stretches as the screenplay started to struggle. The final hour is a bummer, the family portions did come together as it had a scope to create an impact, but the output suffers to do so because of some very generic plot points that failed to connect. The cat and mouse game is flat on the whole, I was happy that it was fresh and neat till midway, then the situation started to fizzle and it became extremely basic, predictable and usual post the interval. Expected some smartly written and executed face-off sequences from H.Vinoth, but sadly the brain was present only in parts. Some commercial elements and supporting characters are underutilized. Dialogues at places and some dubbing voices missed out big time on nativity. The climax messaging is good, but the way it was set and conveyed brings down the value of the intent.

An action film with a truckload of bike chases can possibly be the most suitable one for the person who Ajithkumar is, in real life. Without any doubt, the star comfortably pulls off a Himalayan task on-screen, it’s hard to imagine any other actor who can make the stunts in this film look believable. Also, Ajith’s stylish and sophisticated presence suits the subject. But it doesn’t do much justice for the actor in him. Huma Quereshi fills her space well as a supporting Police officer without much complaint, she also gets a clap-worthy mass moment in the break-point scene. The tend to be menacing baddie doesn’t offer anything exceptional to his character. Asa gang, yes, they are quite haunting at least in the first hour. But as a stand-alone villain character, Karthikeya isn’t convincing enough. There are plenty of other character artists who land as mixed bag, some could have been solid characters with ample potential but finding it hard to strike and there are some familiar faces with just tiny roles to do.

Technicalities:
Yuvan Shankar Raja’s songs are decent. The introduction song sets a celebration mood and it has been visually presented well too, with some nice dance steps from Ajithkumar, appreciable effort. There was a lot of confusion on who did the background score for the film. Leaving out the fact whether it’s YSR or Ghibran… I found the background score to be pretty good, it could have been better in a few areas, but neat on the whole. Nirav Shah’s camera work is outstanding, there are countless number of shots from different angles to make the action portions racier. Editing is a complete misfire, the length appears to be a major issue, importantly I felt the chases deserved a better sharpness and finesse. Hats-off to the entire stunt team, the action choreography is a great value asset to the movie and the main reason for the film’s engagement. Bike chases and action stretches that surround it are never-seen-before, truly stunned by the pre-interval sequence and the long Escape scene in the latter, these two carry the maximum tension out of the lot.

Quite an engaging first hour with a convincing setup and has a couple of unimaginably grand-scale intense chase sequences, also the story has enough potential to hit the right chord… Despite these factors, it doesn’t offer anything exceptional on the whole due to a lot of usual stuffing especially in the second half. With a crisper screen-writing and a gripping latter, this could have been something big.