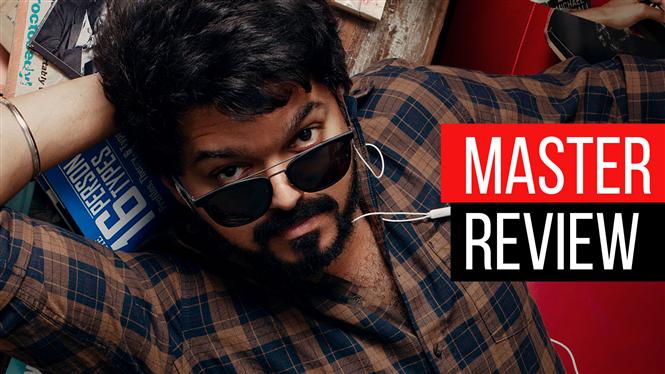 Finally, the most awaited film of the entire Tamil industry is out for its audiences. Thalapathy Vijay’s much hyped Lokesh Kanagaraj film Master, also starring Vijay Sethupathi in a lead role gets to see the light today. It happens to be an unusual Vijay film in quite a few ways. Does it work for the majority crowd and fulfil the expectations of fans worldwide? Read further to find out.

Master as we know, has Vijay playing John Durairaj, an alcoholic professor. His mannerisms are extremely different from all of his films and he happens to be the most liked teacher in his college. Parallely, there is another track featuring a young boy who is sent to juvenile jail for no fault of his. He eventually turns into an evil monster that supplies drugs to children and this amazing character (Bhavani) is played by Vijay Sethupathi. Master is the quest that links John and Bhavani and whether the children reform from this evil or not.

As it might sound, this is a nice line for a perfect hero-villain film. However, Master has a really genuine justification for the villain and lurks around shallow waters when it comes to its hero’s arc. Agreed, Thalapathy Vijay is a big star and he has to have his share of songs, fights and mass sequences. However, the bigger picture that requires clarity is the depth to his character and the reasoning to it. These are not entirely clear in Master’s 3 hours of run-time.

The casting equation has a big positive in terms of both its protagonist (Vijay) and antagonist (Vijay Sethupathi). Vijay Sethupathi as Bhavani is menacing and evil. His screen presence, character edge and dialogue delivery impress. Some of his scenes are the best in the film. Malavika Mohanan plays the female lead Charu and some other students are played by Shanthnu, Gowri Kishan and few others who have little importance to the script. Arjun Das plays Das, Vijay Sethupathi’s right hand and has done a neat job as does Master Mahendran as the younger version of Sethupathi. Poovaiyar has a nice extended cameo as one of the children in the jail and most of the other characters barely get registered.

Lokesh and team have etched out some nice action sequences for Thalapathy’s intro and a few other action blocks too, have decent dosage of action. In fact, one might think Vijay’s acting in the first half as a drunkard professor is very convincing. Particularly, the way he adjusts his pants, his sleeping problem, the dialogue delivery, mood carried by Vijay and a lot of minute details work, in terms of Thalapathy’s performance in the first half.

The first half is almost entirely set in college and the second, with respect to the juvenile jail. As for the first few sequences, Master does take some time to establish its characters and their motives. Some of these work while some of them seem to require more detailing. But eventually, the first half has good moments for both Vijay fans as well as those on the look out for a film with engaging sequences. Specifically the pre-interval block and Vijay Sethupathi’s flashback (played by Master Mahendran) leave a lasting impact.

As for the technicalities, Anirudh’s work is commendable and Vijay’s dance as always, is extraordinary. The Vaathi Coming track is a blessing and so is the Vaathi Raid portion. However, a couple of other songs could have been done away with. Cinematography by Sathyan is neat and the edit could have had some trimming in terms of duration. Overall, a very sound technical team behind Master assures a quality product from XB Creators.

What could have been better

As much as we want to empathise with the motive of John Durairaj, one might wonder why there is no explanation as to why he is how he is. Also, the placement of the Kutty Story song definitely could have been better and the emotional layer deserved more justice. Even the pre-climax sequences had both hits and misses in terms of scenes that could hook the audiences. If for a slightly shorter run time and stronger justification to John’s arc, we may have had more gripping sequences. One might wonder why there was a less dosage of smart scenes, twists, more edge to the protagonist’s character, crisper run-time and an in depth emotional layer for the hero.

On the whole, Lokesh Kanagaraj and team’s efforts does yield some positives and carries a good intention to young children stuck in jail. There are unusual scenes where we don't see the usual mass hero that Vijay is. There is a sense of uniqueness when it comes to how he goes about the act. But Master required more from a creator like Lokesh who gave us Kaithi.  Nevertheless, a functional attempt at making a Vijay film with some level of an uncommon treatment.

Master does have some atypical moments for fans but surely, required more finesse from a master creator who has set a benchmark!