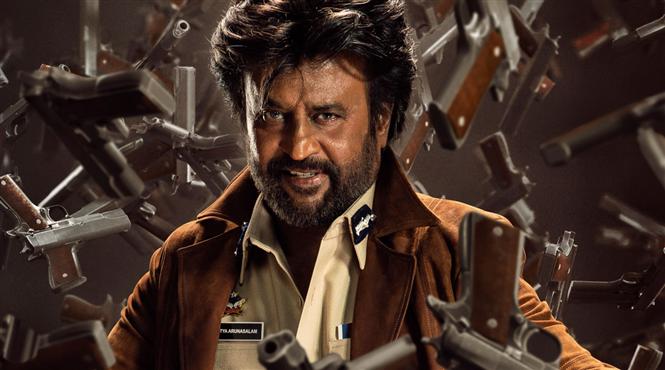 AR Murugadoss is a master of handling big heroes and knows how to balance the stardom pressure and market pressures while retaining his touch of socio-commercial movies as we have witnessed in the past with Vijay, Ajith, Aamir Khan, Chiranjeevi, Suriya, Mahesh Babu and so on. This time it is AR Murugadoss turn to handle the biggest star of Indian cinema. Will the audience say the movie is “summa kizhi…”?

It is a straightforward story of a daring cop, Adithya Arunachalam, who busts the drug network and saves a lot of girls from the grips of trafficking in big bad Mumbai underworld villains. In return, the self-professed bad cop faces the severe consequences of his bold action. How beaten down Adithya Arunachalam emerges 10 times stronger and bolder to take revenge and win forms the concluding part. This is a success template that Rajini's specializes in. Darbar takes the safe route when it comes to the writing department.

After Kabali and Kaala in which Rajini started acting his age or even above his age. The trend was reversed in Petta and the movie showed there is still a lot more you can extract out of Rajini. In order to do that, the director needs to be a die-hard Rajini fan in order to rekindle the Rajini magic, irrespective of the age. AR Murugadoss has tried to do just that by getting under the skin of a Rajini fan for Darbar. ARM has scripted every scene with the only intention of stretching Rajini’s ‘mass’ to the fullest extent. The risk is when you stretch a rubber band too much, it may snap. ARM has been successful in not going overboard in every department. Rajini has faithfully played to the director's agenda. The action scenes have more intensity and aggression.   Rajini dance shots are a bit longer than usual. Rajini is bold enough to bare his body as he is shown working out and he does look very fit for his age.

AR Murugadoss tries to make sure the logic is intact while Rajini brings down almost every criminal in Mumbai overnight.  Murugadoss also takes cinematic liberties to construct an interesting situation involving Rajini and her daughter. The pre-interval bang and some intelligent writing of how Rajini brings down one of the main villains is probably the best portion in the movie. Interestingly, the director has taken a couple of bold shots at 'chinnamma'.

Rajini also woos Nayanthara and comes close to pulling it off. It is not clear if Nayanthara’s role was meant to be a cameo role as she goes totally missing in the 2nd half. The best part of the movie is Rajini’s chemistry with his daughter enacted by Nivetha Thomas. It is not an exaggeration to say Nivetha’s character and her acting appears to have gotten the best out of Rajini’s performance. Yogi Babu does his expected role with a bit less enthusiasm compared to what we have seen. Suniel Shetty makes a comeback after 3 years. He plays the central villain role even though he makes his entry towards the interval and his extended scenes are towards the climax. Apart from Suniel Shetty, other known Bollywood names including Dalip Tahil and Prateik Babbar have a relatively small role to play. Sriman in his short role really busts Rajini’s bubble and maybe fans’ hearts.

Anirudh’s excitement and eagerness to elevate Rajini's mass is evident throughout as there is not a single dull moment in the entire movie. In fact, a few moments of silence or situational score would have helped play up the massy scenes. Anirudh clearly has had fun along the process as he mixes Darbar theme music with Baasha theme. Anirudh has made sure the BGM doesn't get drowned by first-day audience's loud hysteria. Most songs work well except the post-interval wedding song (Dumm Dumm). It is the the equivalent of “Paalam” song from Kaththi, which never made it to the big screen. However, the Dumm Dumm in Darbar escaped the editor’s scissors probably for the reason of not further knocking down Nayanthara’s screen time.

The entire technical crew has worked very hard to shave off many years of Rajini so he can be portrayed evergreen on-screen. Undoubtedly, Santhosh Sivan showed Rajini best looks till the very day. That was in Thalapathy almost 3 decades ago. To the best possible extent, he has done it again in Darbar by carefully lighting in such a way to not expose the make-up and use the right lensing to not expose his age. Santhosh Sivan’s lighting and grading tone are consistent throughout the movie.  Art Director Santhanam, through his sets and art direction, plays an important role in making sure the scenes don’t look alienated as the entire movie happens in Mumbai and other north locations. The costume designers have ensured Rajini’s dance costumes also have khakhi tones while the cop dress is designed to match the Mumbai police attire. Stunt scene choreography and dance choreography have done what is necessary for a Rajini commercial movie.

AR Murugadoss has prepared a cocktail of all commercial elements one would expect to see in a Rajini movie. The movie is packed with the right ratio of action, self-deprecating comedy, romance scenes, sentiments, and revenge set on a familiar format. What is different about Darbar is how Rajini pulls off the role of a cop in his inimitable style and how he continues to entertain while defying his age.