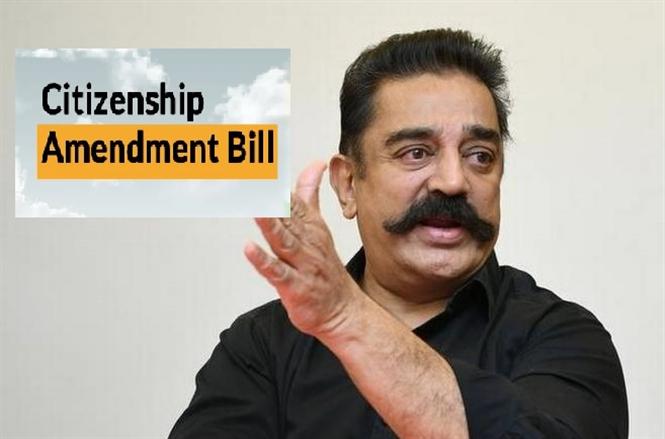 Citizenship Bill, 2019 amends the Citizenship Act of 1955, which provides Indian citizenship status to migrants from Afghanistan, Bangladesh and Pakistan who entered India on or before 31 December 2014. However they must be Hindus, Sikhs, Buddhists, Jains, Parsis or Christians, in-short non-Muslims.  Questioning why it doesn't cover Tamils (Srilankan migrants) and the excluded minority religion, Haasan wrote on his twitter page:

Why are Tamils who are subjected to a methodic genocide and Muslims facing discrimination, be excluded from the bill? If it’s a genuinely benevolent bill and not a vote garnering exercise, then why won’t this CAB stop to pick up stranded Tamils & troubled Muslims of Srilanka?

Haasan's question and the exclusion of all migrants from neighbouring countries comes across as valid, given CAB is being passed with the very intent of "providing refuge to minority groups who have come to India escaping persecution". [Tamil Nadu has a significant number of residents who had fled Sri Lanka during the ethnic strife in the 1980s].

The ruling Tamil Nadu government however has supported the Bill, much to the dismay of the a certain section in the state.

Also, CAB provides no refuge to Muslims especially from the North-eastern state of Assam who were already posed with their worst night-mare called 'The National Register of Citizens (NRC)' [NRC required people to prove that either they, or their ancestors were in Assam on or before March 24, 1971 and rocked the head-lines with the number of suicides that followed as a result of it].

Since Muslim-migrants are found throughout the country (and not just Assam), implementation of CAB would mean a second-class treatment to them, over other persecuted migrants.