Gundu Review - A bomb that sets you ticking and keeps you hooked throughout! 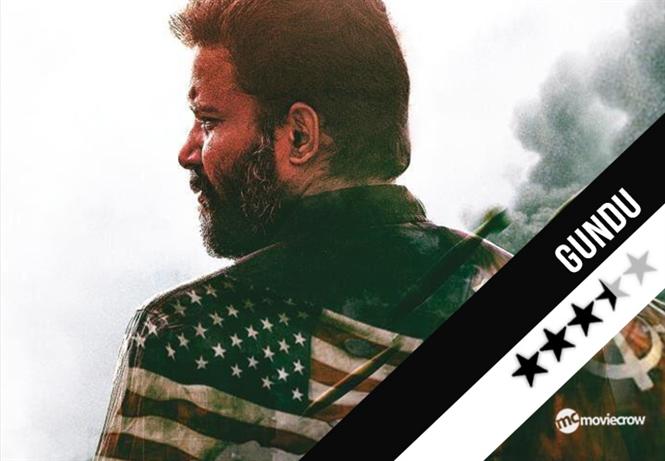 Gundu Review - A bomb that sets you ticking and keeps you hooked throughout!

Actor Dinesh’s Irandam Ulagaporin Kadaisi Gundu by director Athiyan Athirai and producer Pa Ranjith is one of those films which would leave a lasting impact on the watcher. This rooted, native film has content that would appeal universally. Centered around a bomb, what makes Gundu the fantastic film that it is?

Gundu has Dinesh playing a Coolie belonging to the oppressed sector and working at an iron scarp based shop. His dream is to buy and own a lorry in order to do away with the burden that his family has had for many years. Anandhi (Chittu), plays his love interest and she belongs to a sector that is considered to be of an upper strata. The film follows his struggle to marry his girlfriend and to make it out of the gutters of life. But what happens when he finds himself with a dangerous bomb that a lot of other people are on the lookout for?

If Gundu was only about Dinesh’s love story and the struggles he would face due to it, we may have had a very engrossing film on love. But what Gundu’s larger picture holds is what is typically universal. Right from the start of the film we are introduced to the villain of this picture, the bombs from the times of the World War. A bomb is found in Andhra Pradesh and it is mistaken to be a piece of iron. The moment it blasts and wipes out thousands of people, we are awestruck and taken aback. Gundu the film talks about how these bombs can be way more dangerous than the division of caste, creed, colour or religion that we people hold and does this in detail with great conviction.

Dinesh as the protagonist is extremely convincing as he masters his acting and dubbing in all the scenes. He has shouldered the entire film with his innocent yet intense performance. Anandhi as Chittu, his girlfriend has done a fabulous job after Pariyerum Perumal and her character is also very beautifully portrayed. Lijeesh as a corrupt cop and Riythvika as the activist do their roles well. However, the show stealer in the supporting characters department is Muneeskanth as he stuns us with his black humour and timely one-liners along with good expressions.

Gundu the film has these few tracks that intersect at various points but the main motive of the film is that one big bomb that a lot of people are on the lookout for, for various reasons. Who ends up with the bomb and what sort of danger it withholds forms for the rest of the crux of this well layered film. In a way, it can be termed that Gundu is also very educative about explosives.

The biggest credits must go to the director Athiyan Athirai and director Pa Ranjith for this very bold film. The menial issues such as caste and religion seem like a microscopic organ to ones eyes in front of the death and destruction that a dangerous bomb blast can cause. Bringing this sort of a thought into a mainstream film and adding some commercial value to it calls for a lot of guts and pre-production work.

Technically too this movie is on par with big budget films. Be it the music by Tenma or the build up shots for the bomb by the cinematographer and the sensible edit pattern, the picture is filled with positives. One might think the only thing that could have been better are a couple of usual songs but even that is made up for, with some natural visuals. A short part of the latter half where Dinesh tries to bury the bomb and escape with his lorry may seem a little repetitive as he stops many a time for the same. But none of it would seem unwanted or boring at the end of the story and that is the sort of good impact that Gundu has.

On the whole, Irandam Ulagaporin Kadaisi Gundu is a must watch with some brilliant efforts from actors Dinesh, Anandhi, Muneeskanth and the whole direction team of Athiyan Athirai. Credits to the director turned producer Pa Ranjith for giving us another stellar film after Pariyerum Perumal, in the form of Gundu. Do not miss this team effort in theatres for the extraordinary content told to us in a very realistic and engaging manner.

A big thumbs up to producer Pa Ranjith, actor Dinesh and director Athiyan Athirai! Do not miss this Gundu in theatres.