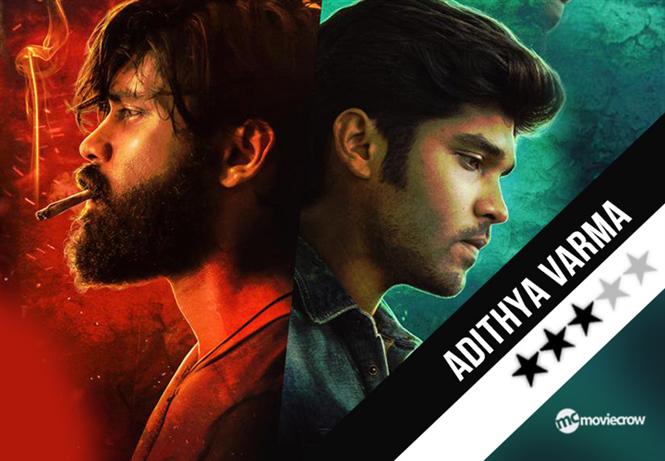 Adithya Varma is surprisingly decent and quite a faithful remake of Sandeep Vanga Reddy's cult classic, Arjun Reddy. Gireesaya's directorial film is geographically set in Mangalore and presents a different kind of college life that hasn't been explored in a long time here.

Dhruv as Adithya holds an impressive debut. After all the hues and cries around this project, he delivers a pleasant performance. The charm and presence he has is promising. And in the film's very famous breakup scene or the interrogation sequence, he is fantastic and genuinely working as the character!

Still, I strongly feel that a film like this is probably the wrongest of choices one can pick for a debut. Or, in other words, Dhruv doesn't meet the manliness that the character Arjun Reddy or Kabir Singh demanded. He is more like a man-child than a man! The anger management issues come off as overt childishness and the ploy of a raging alcoholic getting over his journey of self destruction goes like a breakup episode of a college kid!

The characters around Adithya are interestingly casted. AnbuDaasan who plays Parthi, is convincing as a friend who walks with you through hell and heaven. So is the casting of the grandmother. Leela Samson plays it with grace and dignity. The 'Lag ja gale' touch is a beautiful add-on to the film.

One of the main let downs of the film to me was the casting of Meera. With every remake, I find that Shalini Pandey's performance was truly something. She had this ordinariness in her face which contrasted against the rugged, macho that Vijay Devarakonda had. Even Kiara had a certain sense of this sadness in her looks. Whereas here, with Banita Sandhu, it falls flat. She looks excited and jubilant in all the scenes. And in climax, where in the original, there was a bombardment of emotional peaks and breakdowns, Banita does it like she is in the universe of OKKanmani.

Ravi K Chandran's cinematography and Rathan's score and soundtrack supports the moodscape in right sense. Almost, all the scenes from the original is retained neatly. However, I wonder why they let go off the scene where Arjun gets invited for his friend's marriage. It is one of those brilliantly written moments where the character is brought down to the grounds of reality. But.. all said and done, for the first time viewers, Adithya Varma will work good as gold.

Gireesaya's 'Adithya Varma' is a bit toned down yet a decent, faithful remake of Arjun Reddy. The film is highly engaging and Dhruv Vikram clears off with flying colours as a promising debut and an actor to look forward!